On Thursday, #Human Rights Campaign’s National Press Secretary, Sarah McBride will speak at the Democratic National Convention in Philadelphia. McBride will be the first openly transgender person to speak at a major political party’s national convention.

HRC President, Chad Griffin made the announcement on Sunday, declaring, “Hillary Clinton won’t be the only woman to make history this Thursday.”

The DNC also includes 27 transgender delegates, a greater number than ever before.

Griffin elaborated on the speech’s importance for #LGBTQ rights, and the sharp contrast between the Democratic and Republican conventions. Last week, the Republican Party drew criticism for including homophobic and transphobic policies in their official platform. 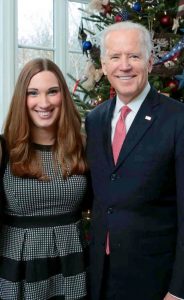 Although many people are hearing of McBride for the first time, she has worked in politics since 2008, and she played an integral part in passing comprehensive non-discrimination laws in Delaware, her home state. She also worked for the Center for American Progress, on several Democratic campaigns, and already made history once in 2012 as the first openly trans person to work in the White House.

McBride publicly came out during her senior year at American University.

“One of the things that I worried about when I was struggling with who I am was whether I’d be a disappointment to the people who had invited me into their lives, their careers,” She said in an interview.

McBride’s momentous invitation to speak on Thursday suggests that her transition, fortunately, wasn’t a threat to her career. However, workplace discrimination is still an enormous problem for many trans people, a fact McBride understands and is working to change. As the DNC looks forward and the general election officially kicks off, #LGBTQ activists and allies know there’s plenty of work to do, plenty of history in the making.

During the third presidential debate, Trump attacked Clinton on the grounds that she takes money from Middle-Eastern nations that commonly condemn and kill gay…