Missouri’s own Erin O’Flaherty, 23, is the first openly gay contestant for the Miss America pageant. This is the first time an openly gay woman has run as a candidate since the pageant’s creation in 1921.

In an interview with Cosmopolitan, O’Flaherty shares about #coming out. She used to feel a conflict between her femininity and her sexual identity. Since she didn’t fit the “butch” lesbian stereotype, she questioned her sexuality for years.

Being publicly out makes her feel more comfortable, she explains. She says this helps her perform.

O’Flaherty took the Miss Missouri crown last month. Since then, she has voiced her concern over the lack of #LGBTQ representation in the organization. Regardless, O’Flaherty says the Miss America Organization and the other contestants have been entirely supportive of her. 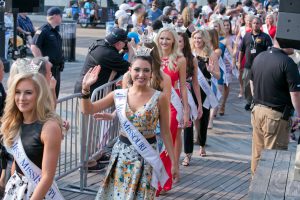 Going into the pageant, the main issue she intends to discuss will be #suicide prevention within as well as outside the LGBTQ community.

Studies show that LGBTQ people are at a greater risk of suicide than cis and straight people. Transgender people are over ten times more likely to attempt suicide than the general public.

During her competition, O’Flaherty says she will use this platform to further the conversation on suicide awareness. Working with the American Foundation for Suicide Prevention and The Trevor Project, she intends to be a front runner in ending stigmas surrounding suicide. Suicide prevention is a personal issue for her. O’Flaherty lost someone close to her to suicide at the age of 13.

“It changed my life,” O’Flaherty told CNN. “I hope that by sharing my story I can inspire others to speak out on their experiences, because suicide is a subject that is often taboo.”

Suicide is a serious issue in the LGBTQ community. If you are having suicidal thoughts or need to talk, please reach out for help.

Over the weekend, the Democratic National Committee (DNC) held the election for their chairperson. Former Labor Secretary for the Obama Administration, Tom Perez, came…