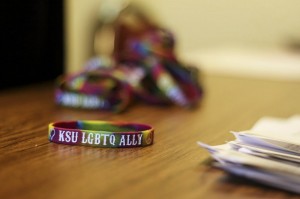 On a beautiful October day, several students gathered in the third floor of the student center. Roxie Patton, the program coordinator for #Kent’s LGBTQ Center stood in front of the room and welcomed us to Ally Training. She started by introducing herself and then turned it over to all of us to do the same by saying our names and why we were there.

As everyone started, I thought of the reasons I was there. Sure I was writing a piece for Fusion, but in the larger scheme of things I had always been curious about being a certified ally. I had declared being one at a PRIDE meeting last year, but it had never really gone farther than that. So when it came to me, I said I wanted to learn more and that LGBTQ issues were important to me. And in terms of learning more, training would definitely not disappoint.

As with anything, this training had rules: no sole possessor of knowledge (meaning that there was no one person who knew everything about a subject), take risks and make mistakes, respect each other, no cell phones, and the ‘ouch’ rule, pertaining to subject matter that may offend people in the room. Although the ‘ouch’ rule was never used, it was still a good thing to keep in mind while we were in discussion.

The very first thing we did after that was a star activity that modeled our own personal coming out stories depending on what random colored star we were given. Some were lucky during this activity, with people being accepting and their stars remaining unfolded. Others, like myself, had points of our stars folded down meaning that the acceptance of our orientation would come with time from those we loved the most. And then there were the people who had torn up their stars until they had nothing left. These people represented the staggering percentage of LGBTQ people living in America that commit suicide every year due to lack of understanding.

This activity had a huge impact on me because it made me realize how quickly people may deteriorate and feel hopeless while the rest of us stand as silent witnesses.

After this, there were several informational slides using the ‘genderbread’ person as a model. Sexual identity including Asexual, Gray Asexual, Demi sexual, and Sexual was discussed, along with the differences between Sexual and Romantic orientation. Then we discussed biological sex and gender identity and how those differ for some.

I could see that a lot of my peers were learning much that they had never considered before much like myself and it was refreshing to hear in a non-judgmental place where honesty was highly regarded.

We talked about gender pronouns including the neutral ones that can be used (Ze, Hir, Hirself) and talked about transgender people. The staggering fact that 1 in 10 transgendered people will be murdered or assaulted in their lifetime and brought back to reality the real importance for why we were there.

After the slides, a panel appeared to share their stories and answer any remaining questions that we had. They were all students here and each had a different coming out story. While we were hesitant to ask questions, they strongly encouraged it and did a great job of making all of us feel comfortable.

I really could have sat and listened to their stories for hours, and towards the end of panel they gave us suggestions and advice. Some of that included ‘ask pronouns not gender,’ encouraging RA’s to host events, not outing people, and to get rid of hate speech in our lives, even if it’s being used by those around us, something that is heard way too much on our campus.

As we were given reference lists with numbers to call if a student is in trouble and Ally training was closing, the gravity of the situation started to close in on me. As an ally you’re making a promise that you will help other people that are in need and that you’re accepting of people for who they are.

Many people are allies in their everyday life without realizing it, but by going to training it makes you a certified one and loads you with knowledge. By attending that session I was made more aware as a person and it was reinforced to me that we have to speak for people who need our help.

Most of the values of an ally can be summarized in a quote by LaRue, one of the panelists that I had the pleasure of speaking with: “gay is not a disease, you won’t catch it from hearing someone’s story.” The next ally training is being hosted by PRIDE and will take place on October 30th at 5:00 p.m. in room 317 of the Student Center.

The Biden administration announced on Feb. 11 that the Fair Housing Act will now protect LGBTQ+ Americans, CNN reports. The federal government will be…