“An openly gay pastor at a Methodist church in Cincinnati found his office broken into,” wrote the Clifton United Methodist Church on Sunday. The thief appeared not to have taken expensive goods, but instead stole Pastor David Meredith’s seminary diploma and ordination certificate.

The Clifton United Methodist Church issued a statement on social media denouncing the homophobic message sent by the theft.

“Throughout the three decades of Rev. Meredith’s impactful, Spirit-led ministry, there have always been a select few opposed to his presence in the United Methodist Church as a gay man,” the statement read. “This opposition reached a head before the 2016 General Conference when complaints were filed over David’s marriage to his partner, now husband, of over thirty years, Jim Schlachter.”

Meredith faced multiple church court challenges based on his sexuality, reported the Cincinnati Enquirer. In March, the North Central Jurisdictional Committee on Appeals held a hearing relating to charges of being a “self-avowed, practicing homosexual,” “immorality” and “disobedience.”

Following the theft, Clifton United Methodist Church implored “those who sent complaints against Pastor David to denounce this hateful attack.”

In their statement, the church explained how denouncing #LGBTQ people as sinners leads to discrimination, intimidation and violence.

“This is no isolated attack,” the statement read. “We are called to oppose discrimination and hate in all its forms.” 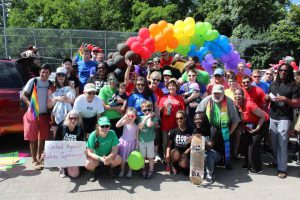 Clifton United Methodist Church displays a photo of Pastor Meredith and a group of congregants at Cincinnati Pride, standing in front of rainbow-colored balloons. Several members are wearing Black Lives Matter shirts and one is holding a sign which reads, “United against white supremacy.”

Despite Clifton UMC’s stance, there remains a divide within the United Methodist Church on LGBTQ rights. Last May, the United Methodist Judicial Council upheld its ban against openly-gay clergy members. Churches which support LGBTQ rights, such as Clifton, affiliate themselves with the Reconciling Ministries Network, an organization of Methodist congregations which believe in LGBTQ equality.

Clifton UMC will hold a rally for Meredith and other LGBTQ clergy at 7 p.m.

On July 28, northeast Ohio’s #LGBTQ community was disappointed by the unexpected announcement that this year’s Cleveland pride event was cancelled. Todd Saporito, CEO…