There was dancing, no drinking, and a little fooling around between myself and my friend Max. Afterwards, Max and I came down from his room, to suddenly find everyone who planned on participating there and ready for sex. 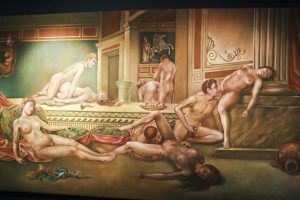 One girl was on her period, which made her slightly self-conscious. Everyone reassured her that the body and all its functions are beautiful and NOT disgusting. She eventually decided to go for it, and probably felt a lot better about her experience, despite worrying about staining the sheets.

In a space that contained eight sexually fluid people, we explored one another until, three hours later, we puttered out and rejoined the party.

Before this experience, I oftentimes heard people say “consent is sexy,” but I only said it myself to encourage consent. I didn’t actually believe it. After this experience, however, I truly do believe it. Consent establishes desire and willingness so all the anxiety around whether or not it’s okay to do something disappears.

Willemina Davidson is a Bachelor of Integrative Studies student, with concentrations in Anthropology, Jewish Studies and Religious Studies. She is a sex-positive Jewish feminist and an avid Esperanto enthusiast.