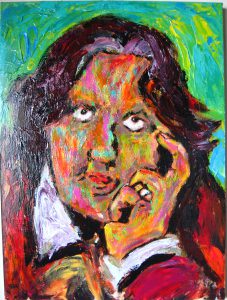 “Be yourself; everyone else is already taken.”

If you’re like me, you’ve seen some variation of this quote littered all over every single social media site imagined. Your friends post this to Facebook, Twitter, and Tumblr all with the intention of gaining attention, just as its original author probably had intended as well. Oscar Wilde, the man who is often called the first man famous for being famous, dedicated his life to being a spectacle. Later in life he published a book of poems and authored The Picture of Dorian Gray, but even before that he was well-known for his life as an aesthete. He carried flowers around the city and threw himself at actresses of his day frequently. He was actually parodied in Gilbert and Sullivan’s Patience, and was then commissioned to America to promote the US debut of Patience. He had milked his fame after he had finally had some commercial success which made him well-known around the world.

In May of 1884, he married Constance Lloyd whom he had happened to be visiting Dublin when he was lecturing at the Gaiety Theatre. After Constance had popped out two children, Wilde became physically disinterested in her, which proved a wonderful opportunity to #Robert Ross who had decided to seduce Wilde. They presumably had a short affair before Wilde moved on to his long-term lover #Lord Alfred Douglas.

Lord Alfred Douglas and Oscar Wilde had an odd relationship. They frequently broke up, but always reconciled and began where they had left the relationship. Alfred’s father, the Marquess of Queensbury, quickly suspected that he was developing an inappropriate relationship with Wilde and wrote to Alfred threatening to cut off all monetary support he was getting at the time. All Alfred responded with was a short letter saying “What a funny little man you are.”

Wilde had endured two trials in his lifetime, making him even more of a celebrity. Wilde actually initiated the first trial in accusing Queensbury of criminal libel. The only way that Queensbury could avoid being sentenced to jail would be to prove that his accusations against Wilde (obviously about being a sodomite) were, in fact, true. Queensbury was eventually acquitted, and under the law, Wilde had to pay Queensbury’s defense expenses, rendering Wilde officially bankrupt.

After the first trial had ended, a warrant for Wilde’s arrest had been issued. Sodomy then had been a crime punishable by law, and since Queensbury had been found not guilty of libel, it only made sense that Wilde was found guilty of sodomy. Numerous comrades advised Wilde to flee to avoid being apprehended, but it was actually his mother who told him to remain and fight it like a man. After a passionate speech about the “love that dare not speak its name,” Wilde was found guilty and both he and Alfred were sentenced to two years’ hard labor.

Upon his release in 1897, Wilde felt spiritually awakened. He wrote to a Catholic retreat, which he was denied, and wept when he discovered their answer. He then fled London and spent the last three years of his life in exile under the pseudonym Sebastian Melmoth. While in his exile he wrote even more publications, and perfected And Ideal Husband and The Importance of being Earnest as well as writing to a newspaper advocating penal reform.

Wilde, throughout his entire life, was known as a man who was famous simply for being famous. He was dubbed the king of the epigram; many of which are still repeated today, and through these hackneyed phrases, Wilde’s legacy lives on. So “be yourself; everyone else is already taken,” and maybe through it all you could inspire generations to come to be who they are and live peacefully. Even though Wilde’s life was a constant struggle, he made it easier for people to believe that there are others out there just like us who can still reach commercial success.

by Kelli #Fitzpatrick Elyzabeth #Holford is leading a brand-new #marriage equality education campaign, Why Marriage Matters #Ohio, which was announced in September. But that’s…