I don’t remember the first time I realized it was “wrong” for me to be male, but I’d guess it was some time before I stole an American flag. I was about five years old and it was perhaps my second act of rebellion. The first, of course, was daring to exist as a trans boy, daring to break the unwritten, unspoken rule that genitals determine gender. Both rebellious acts left me feeling ashamed.

Rebellion is controversial. Whether it’s destroying boxes of British tea, protesting the Vietnam War or blocking a Pride parade to protest corporate sponsorship and police violence, there will always be people who disagree with this form of disagreement. That’s the foundation of democracy: valuing and holding space for disagreement.

Since today is July 4., many of my friends in the #LGBTQ community, as well as people of color, non-Christians and others, are wondering what today means or flatly rejecting the idea that Independence Day celebrations include them. After all, black people were still considered property after the American Revolution. This country has never had a president who didn’t at least claim to be Christian. And while American history may begin in 1776, LGBTQ Americans’ history is often considered to begin 193 years later. Today, black Americans are still racially profiled by police and incarcerated into unpaid labor at a disproportionate rate. People from six Muslim-majority nations are prohibited from visiting their grandmothers in the United States. Anti-LGBTQ #discrimination is legal in 28 states, including Ohio, and yet another trans woman of color was killed this week. If “liberty and justice” isn’t quite “for all,” how can the rest of us call ourselves patriots?

Patriotism, like gender, means different things to different people. Merriam Webster defines patriotism as “love for or devotion to one’s country.” I might love this country. I certainly feel strongly about many of the ideals it purports to value: democracy, liberty, opportunity, justice. But does this country love me back?

According to John F. Kennedy, that isn’t the question. He famously implored, “Ask not what your country can do for you–ask what you can do for your country.” The songwriter of A.J.J. (Andrew Jackson Jihad), a folk-punk band from Arizona, seems to agree. In a song titled “Lady Liberty,” they sing, “When our government acts like this, I don’t want to live here anymore/Sure, I could be a pussy and move to Portland or New York, or I could stay and change the place where I was born.” 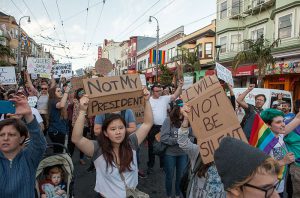 If love or devotion to my country means working to improve it, then I am proud to call myself a patriot. I believe that this country is better when everyone here has the chance to live its ideals of freedom and justice. From what I’ve learned so far as a student and activist, this #equality of opportunity is not the case. Not everybody in the U.S. can access the same rights, and this disparity often correlates with people’s membership in certain groups, such as race, religion, national origin, economic class, gender or sexuality. So, like many others, I’m trying to close these gaps of differing advantage and give everybody a roughly equal shot at “the American dream.”

Some people disagree. They may believe that patriotism means wholeheartedly believing that the United States is perfect exactly as it is and anyone who disagrees can pack up and leave. People may also believe that patriotism equates to extreme nationalism, or feeling that one’s country is the best. I do not believe this either. I take no particular pride in being American because I put no work into being American. I was just born here, which took no effort on my part.

So, it depends who you ask, whether I love my country or not. Since LGBTQ people are still fighting for our seat at the American table, I often feel this country does not love me. But many people here do and I love them, too. For the last few years, I’ve ended up spending Independence Day with other trans people. We’ve watched fireworks and we’ve also stayed in and soothed each others’ state-inflicted wounds. Whether or not you love your country or celebrate Independence Day, I think love is what it comes down to. Today I believe our love for each other will continue driving us to help improve our lives and the places we live. So, in love for freedom, justice and equality for all, I will see you at the next protest.

Calling herself a “paranormal fantasy author,” Maggie Stiefvater is well-known for her young adult novels. Her most popular works are the four-part series, “The…