Election night is usually the same every year for your average voting citizens. Most people sit at home with their family 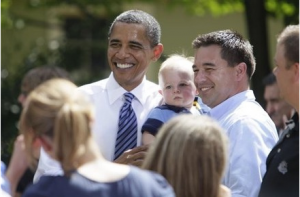 watching their favorite politically biased news network discuss politically skewed polls and speak nothing but great things about the candidate they favor.

I won’t lie, it was about the same for me. Luckily for us, the election turned out how we had hoped –

President Obama gets another four years, Senator Sherrod Brown gets another six and various other Democratic candidates picked up seats, expanding the lead in the Senate.

While all of these things are great, there were some victories in Maryland, Minnesota, Maine and Washington that, for me, help to clearly map out the direction American #politics is taking.

In 2009, voters in Maine failed to legalize same-sex marriage. A bill passed by the state legislature would have allowed same-sex couples to legally wed, but when taken to a vote by the citizens of Maine, 53% voted against it, stopping the legislation in its tracks. On election night just a couple of days ago, voters approved Maine’s “Question 1” by 53% effectively making same-sex marriages legal.

How’s that for a flip-fop? Looks like the voters of Maine learned a thing or two from Governor Romney.

Washington also voted in support of marriage equality on Tuesday. Referendum 74 was approved by 52% of the voters. Washington is a vote-by-mail state and as of Thursday about three quarters of the votes had been counted. Opponents of Referendum 74 conceded the race on Thursday, thereby stopping the contest on whether or not the measure would pass after all of the votes were counted. In something that I’ve never seen before, the supporters of Referendum 74, Washington United for Marriage raised just over $12 million while their opponents raised just less than $3 million. Washington United for Marriage took donations from big names such as Mayor of New York City Michael Bloomberg and Microsoft co-founder Bill Gates.

Maine and Washington weren’t the only states to take a step forward on Tuesday night. Voters in Maryland voted to approve Question Six. In March of this year, Governor Martin O’Malley signed into law a bill legalizing same-sex marriage. Opponents of the bill eventually managed to gain enough signatures to put the bill on the ballot which became Question Six. It was approved by 52% of the voters.

Let’s not forget that voters in Minnesota also voted down a measure that would amend the Minnesota Constitution to define marriage as a union between one man and one woman.

All in all, I’m pretty damn proud of my country.

For the very first time in American history, marriage equality was approved by a vote of the citizens. Maine, Washington and Maryland join six other states and the District of Columbia in allowing and recognizing same-sex marriage. We didn’t hear much about these victories, and I think in the general scheme of things, rightly so.

Let’s keep up this momentum and keep pushing forward to better days.

Check out this video of one crowd’s reaction the moment Maine passed same-sex marriage: