Our favorite gay-friendly show rounds on another serious topic this week: faith. #The New Normal looks at faith in all its forms: faith in various religions, in family, in friends and in the afterlife. So very well done…and I’m not even religious.

“The Jew in the room has a question.” 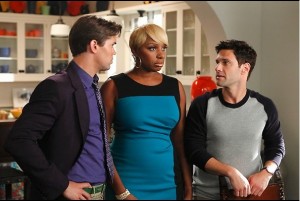 Rocky (center) tells it like it is–and then some. Photo credit: #NBC.com

Amid the happy chaos that comes with expecting a child, Bryan and David lost track of one aspect that used to be of great importance: faith. They decide their unborn child will need a godparent or two, but choosing such a person or people to spiritually guide their baby is easier said than done, when their own understanding of faith is jumbled. The colorful cast of The New Normal represents many levels of faith and #religion, and this comes to light with ease.

Rocky, as we find out, is actually a godmother herself–yes, all that sass helps guide a little girl. My understanding of godparents is along the lines of David’s (“It’s mostly about rides to the airports, right?”) where they are family friends who pop in during regular get-togethers, but aren’t bound to the title of spiritual guide. With this view, they set off to find the perfect godparents.

They have their lesbian friends over for dinner–Tiffany, played by the wonderful Leisha Hailey, AKA Alice from The L Word–and Victoria–Constance Zimmer of Entourage fame. The ladies turn down the offer; their own infertility issues means they can’t have kids of their own, so they don’t feel right acting as guides to someone else’s child. Slightly selfish, maybe, but they just cleared the path for the right godparents to step in. 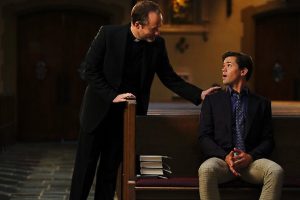 Religion and faith continue to clash as the episode goes on. Shania, realizing she doens’t have godparents of her own, asks Bryan and David to be hers. She loves them like family, and even thinks she shares the same kind of soul with Bryan. The guys immediately refuse, because they don’t have spiritual conviction of their own; Shania has that department more figured out than they do. The little girl is weirdly mature and awesome at life.

The New Normal does an amazing job when it comes to incorporating the Catholic church. Again, I don’t follow any religion. But I applaud the show’s portrayal of the church: Bryan goes to confession, and he gets to bickering with the priest about the church’s views on gays. The priest puts him in his place: the church is not anti-gay. The gay community fights for their rights valiantly, but when it comes to their spitiuality or religion, they give up, thinking they don’t belong. But he wants them to fight. It would have been too easy for The New Normal to paint the Catholic church as a negative, homophobic being. So they instead introduced a forward-thinking, real-talking priest. He’s glad to see that Bryan has reclaimed his faith by episode’s end. When Bryan notices the “altar boys” are now girls, the priest says, “It took a few thousand years, but things can change. If someone is willing to fight for it.” 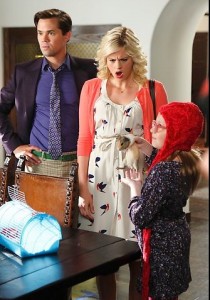 Shania finds out her guinea pig has been switched: the evidence is in the lady parts. Photo credit: NBC.com

We are introduced to Shania’s pet guina pig, Marshmallow, who turns up dead by the halfway point of the episode. Bryan blames David for not “watering it,” and they take the cliched way out: Buy a lookalike guinea pig from the pet store and replace Marshmallow. Shania will never know! Rocky immediately points out their faulty plan: She Googles what other TV families have planned the same scheme, and watched it fail. “The Bradys, the Partridges, the Growing Painseses…Saved by the Bell!” she reads off. But, at the mercy of her boss’s gullibility, she switches out a new Marshmallow, this one alive and healthy. Shania immediately notices her pet has been replaced, due to its new genitalia–this one is a female! Bryan tries to explain it is a transgender guinea pig (hilarious) but Rocky takes over and tells her the truth. Marshmallow is dead, but that’s the circle of life, etc.

The saving grace of The New Normal continues to be its frank, realistic portrayal of its lead gay characters. A final scene in the episode shows David walking in on Bryan praying for the first time in 15 years. Where other TV gay couples would turn this into a mocking session (think Mitchell’s sarcastic jabs at Cam in Modern Family), David reflects on his own lost faith–he used to attend Temple before Med School–and admires his partner’s spirituality. Then they pray together. This was one of those intimate, normal moments that sets this show apart.

Finally, the guys realize who their child’s perfect godparents would be: Rocky, with her age-old, no-nonsense wisdom about life and death; and Shania, with her open-minded understanding of family and the afterlife. Then they all lived happily ever after, or at least until next week.

The fabric of the #LGBTQ community is tightly woven and it’s no different at #Kent State. Due to LGBTQ students’ closeness, people often know…