Herpes. Chlamydia. Gonorrhea. HPV. These four sexually transmitted infections, or STIs, are among the most common on college campuses.

Summer Wigley, a grad assistant at #Kent State, is aiming to end the stigma that comes with STIs. Herpes infects 1 in 6 people in America, and there were 1.5 million new cases of chlamydia in the U.S. in 2016, said Wigley. Most people’s perceptions of STIs are negative: nasty, scary, dirty.

“I never want someone to feel alone,” said Wigley about people who have STIs. 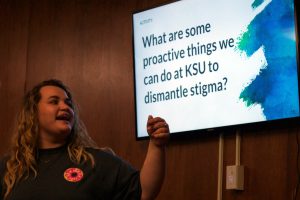 Summer Wigley talks about initiatives at Kent State to improve awareness and testing rates for STIs among college students. Photo by Carlyle Addy.

She wants to use STIgma to provide support for people who are suffering from STIs and to advocate for women’s health.

At the unveiling, Sex Week workers and Wigley handed out water-based lube, tampons and cotton candy. Wigley began the presentation by clapping to a beat until most of the audience began clapping with her. She then told the audience they were going to be talking about the clap, a slang term for chlamydia. 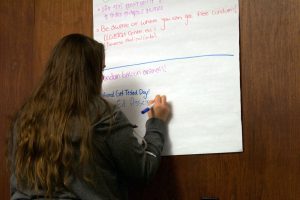 A student brainstorms ways to bring awareness to the importance of STI testing for college students. Photo by Carlyle Addy.

The truth about STIs is that nobody asks for them. It can happen the first time you have sex or the hundredth time. You can get STIs if you have only had one partner or if you’ve had many. Having an STI does not make you any less lovable and there’s a community of support, which students can now find at Kent’s campus through STIgma.

Stephanie Groeschen and Samantha Halcomb, juniors, came to the event mainly to learn, but also for the stickers people receive by attending Sex Week events. Halcomb said she learned about the prevalence of STIs on college campuses and Groeschen agreed.

Wigley presented information on STIs in a fun and upbeat way. She plans to use STIgma to bring the issue of STIs closer to home, to show it’s not something that only happens far away. The initiative seeks to end the stigma surrounding STIs, to educate people on them and to help people have healthier sex lives.