The walkout, organized by Student Power Coalition, encouraged students to walk out of their classes and come together in solidarity for underprivileged and underrepresented groups in the U.S. and elsewhere.

Student Power Coalition (SPC) is a student organization that focuses on demonstrating solidarity with all underprivileged and underrepresented people and communities on Kent’s campus and all over the world. 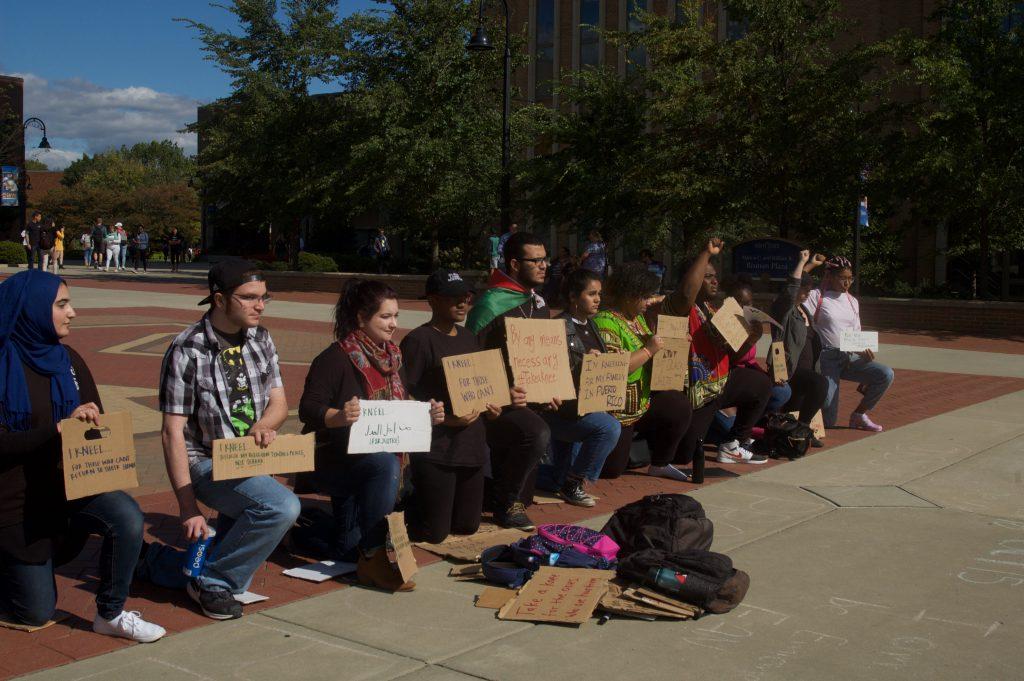 Students kneel during the protest on Risman Plaza. Photo by Carlyle Addy.

Claire Bobel, a member of SPC who helped plan the walkout, said the event was inspired by the actions taken by NFL players this past weekend.

“We just wanted to do something, so we did it,” Bobel said. 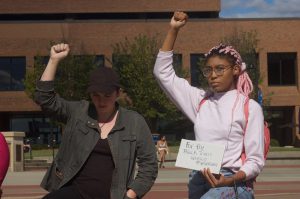 Liza Henriquez, whose sign condemned the lack of disaster relief to Puerto Rico, broke down in tears for her family members who lost everything in Hurricane Maria.

“They don’t have water, and they barely have food, and no one’s doing anything about it,” she said. “I don’t know how people don’t have empathy.”

Elizabeth Hare, a senior zoology major, knelt with a pride flag tied over her shoulders, also wearing a Palestinian scarf and a Native American necklace to symbolize her support for every underrepresented group.

“I’m here for all the underprivileged of America, the minorities of America,” Hare said. “Especially under this presidency, now more than ever we need to stand united together.”

“Standing united” is exactly what the event was meant to demonstrate – and several students took notice as they walked by. 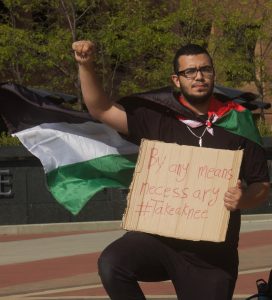 Some students, like freshman Dante Bonner, stopped because they had the time to spare.

“I guess I could study, but it’s better to make a statement,” said Bonner. “I’m really tired of our leader and his vulgar language toward everything. It’s not professional, it’s not right. It’s just pushing people further and further away from each other. It’s good just to have some positivity.”

Other students, like junior public relations major Myles Taylor, stopped on their way to class.

Katelyn Rinella, whose brother is a member of the Armed Forces, was on her way home when she stopped and decided to join the protest.

Many students who did not stop to participate raised their fists in solidarity as they passed or yelled words of encouragement at the demonstrators.

Demonstrators representing every cause agreed that the most important aspect of the walkout was unity with other minority groups.

“We’re here to show that Kent State is here for each other,” Bobel said. “I am a queer femme. I have not personally faced that much discrimination in my life, but I know others that have. I think that people with privilege like myself, we have a responsibility to do as much as we can – use that privilege for the benefit of others.”

The fabric of the #LGBTQ community is tightly woven and it’s no different at #Kent State. Due to LGBTQ students’ closeness, people often know…