PRIDE!#Kent opened the floor for members to propose ideas for upcoming spring semester events, discuss on-campus activism and enjoy a few party games and crafts during Thursday’s Welcome Back meeting.

Members of the board and student members suggested events and meetings to cover topics like #LGBTQ healthcare, queer history, utilizing Title IX and different methods of activism.

Dr. Shay Little, Vice President of the Division of Student Affairs, and Dr. Lamar Hylton, Dean of Students, kicked off the meeting by telling members about upcoming university projects, such as the proposed ten-year master plan and the upcoming Student Organization Fair, before handing it over to PRIDE!Kent president Kasey Willener. 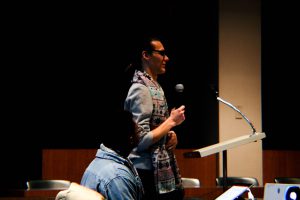 Pride!Kent President Kasey Willener answering questions of the board during the meeting. Photo by Cameron Glover.

According to Willener, a senior history major, this meeting marked a change in operation for the group, which historically forms a schedule of events without taking input from its members.

“We ended up doing the same thing for a couple years in a row,” Willener said of the previous method. “It was boring. We want to do what people want to talk about.”

While dozens of new ideas were proposed to the group, PRIDE!Kent does have a few events confirmed for this semester, such as “Pink Triangle: Queers in the Holocaust” and “Queer Women: Then & Now”, as well as its traditional drag show.

Many of this semester’s events and meeting topics are still unconfirmed, but PRIDE!Kent has a newfound list of events and discussion topics to choose from.

For more information about PRIDE!Kent and its schedule of events for the spring semester, visit its Facebook page.

by Blythe #Alspaugh Ever since it was announced that ARTPOP was slated as Lady #Gaga’s next album, Little Monsters have been impatiently waiting for…