On Wednesday, a Survivor contestant, Jeff Varner, outed his competitor, Zeke Smith, as #transgender. Varner then accused Smith of being deceptive.

“Why haven’t you told anyone you’re transgender?” Asked Varner. After a pause, he said, “What I’m showing is a deception.”

Trans people face enormous amounts of #discrimination and #violence. Most states, including Ohio, do not have legal protections against discrimination for trans people. As a result, employers, housing authorities, and government services can legally discriminate against trans people, which leads to poverty and increased risks of violence.

Additionally, the idea that trans people are inherently deceptive is used to justify physical and sexual violence against trans people.

Chase Strangio, an attorney for the American Civil Liberties Union, tweeted about the fatal consequences of believing trans people are deceitful. He wrote that when trans women of color are outed, they are often killed in response. 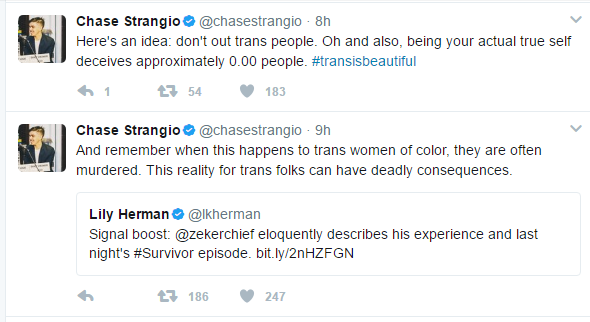 The phenomenon of #LGBTQ murders intersecting with the misconception of “deceit” is so prevalent, there is a legal defense pertaining to it. The gay panic or trans panic defense has been used by defendants in murder cases, arguing that the defendant was so shocked by the fact that the victim was gay or trans, they flew into an uncontrollable panic during which they killed the person.

In 2015, activist and author, Julia Serano told NBC about that common, dangerous misconception, that trans women are trying to deceive straight men into having sex with them.

“That idea of sexual deceit plays out a lot in violence perpetrated against trans women,” Serano said.

Statistical data about transphobic violence support Strangio and Serano’s remarks. According to the 2015 U.S. Transgender Survey, nearly 10 percent of transgender people were physically attacked in the previous year for being transgender. Also, 47 percent were sexually assaulted at some point in their life, 10 percent during that year. Reported trans murders increased each year since 2013, according to GLAAD.

#Pop culture and entertainment are not the only areas where transphobic misinformation abounds. Politicians often claim that trans people are deceitful. This idea sometimes forms the basis for laws, such as North Carolina’s HB2, which criminalized trans people’s restroom use.

However, some government officials recognize the harm in transphobic acts such as outing people. After watching Wednesday’s Survivor episode, Cincinnati city councilman, Chris Seelbach spoke about the dangers of outing trans people in Facebook Live video.

“It’s almost never okay to out an LGBT person without their consent.” Seelbach said. He added that he thinks it might be acceptable to out an LGBT elected official whose policies are anti-LGBT.

“The problem last night on the episode of Survivor was far deeper than that.” He continued. “Because the contestant Jeff, said that, as a way to explain how the transgender contestant was being ‘deceitful’ the entire game, in his opinion, he said that he’s being deceitful and you can believe it because he’s also [deceived] us about being transgender.”

Seelbach elaborated, “There are so many layers of that being wrong. Someone not telling you if they’re LGBT is not because they’re being deceitful or lying to you, it’s because we all have our own journey to coming out, and none of us should be forced or be required to tell anyone about who we love or who we are, until we’re ready. It’s absolutely not a sign of being deceitful or lying if someone hasn’t disclosed their LGBT status to you. It was just all kinds of messed up.”

Some people mentioned how it wasn’t only “messed up” of Jeff Varner to out Zeke Smith, it was wrong for the show’s producers to leave that segment in the aired episode.

“The issue of outing, though, is different [from other reality TV ‘bad behavior’] because it necessarily involves the dissemination of privileged information, something a national network has far more capacity to amplify than a single man amongst a handful of peers on a show’s set. One could reasonably make the argument that Varner outed Smith to their cast while CBS outed Smith to the world.” Wrote Rich Juzwiack, for Jezebal.

Encouragingly, the other competitors and the show’s host, Jeff Probst condemned Varner for his actions. Although Varner–who is gay–apologized and claimed to advocate for transgender people in his home state of North Carolina, he was voted off the island.

Although Smith wasn’t happy about being outed, he noted there may be a consolation effect.

“Maybe there’s someone who’s a Survivor fan, and me being out on the show helps him, or helps her, or helps someone else. So maybe this will lead to a greater good.”

President Joe Biden nominated Pennsylvania Health Secretary Rachel Levine as his administration’s assistant secretary of health on Jan. 19. If approved by the Senate,…