Every seat was filled as hundreds of Marvel fans from all over the world gathered in Chicago to see two of their favorite actresses, Brie Larson and Tessa Thompson, Oct. 12 at ACE Comic Con.

Larson, known for her role in the Marvel universe as Captain Marvel, and Thompson, who plays Valkyrie in “Thor Ragnarok,” sat together on the stage to answer questions sent in by fans. Both characters appear in the summer blockbuster “Avengers: Endgame.”

They discussed the #LGBTQ+ community because the day before the panel was National Coming Out Day. Thompson held the audience’s attention when she mentioned how the LGBTQ+ community has impacted her since she started playing Valkyrie, the first LGBTQ+ person in the Marvel universe.

“It feels heroic to me- all the people that are coming out when they are inside of communities or inside of families where that’s really challenging,” Thompson said. “I hope we get to the space where we see so much representation that we don’t have to congratulate anybody, because we know that it just exists and it’s not going away.”

For fans, meeting the stars was exciting and emotional as their deafening screams filled the convention center when the two women walked onto the stage. It was equally heartwarming for the actresses to meet the people who support them in their careers. They said that they loved to hear the stories fans told them.

“The past two days have been really moving for me because I have gotten to take so many photographs with folks with their pride flags,” said Thompson. “One woman today told me she was going to use the photograph to come out, and we just hugged each other for such a long time.”

Larson had a similar experience with another attendee, Ella Pascua, who came out to her religious parents after the convention. After their photo, Pascua turned to see her friends with Larson jumping up and down and yelling, “We support you.”

“Since I felt like I couldn’t find a community that would support me in my own household, I [looked for] that elsewhere and found Brie Larson leading that ship,” Pascua wrote in a direct message. “Without her encouragement and motivation to live my true self, I would not have been able to come out.”

The two women were posing for photos with fans and signing autographs nonstop. Both are public supporters of the LGBTQ+ community and were given pride flags to pose with.

“Tessa is so outspoken about her support for LGBTQ+ and female representation in the media. I figured since this was her first comic con, it would probably mean a lot to both of us to pose with the pride flag,” wrote Ivy Kr, one of the convention attendees who met Thompson. 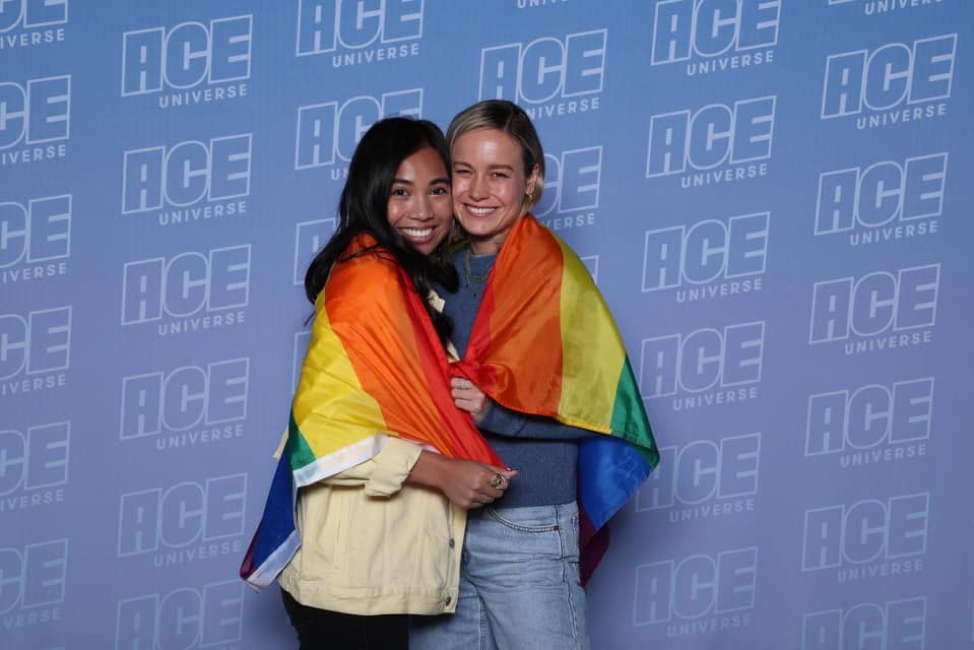 Larson, who is also a vocal supporter of the community, tweeted she was “changed” when she was part of a proposal during one of her photo meet and greets. John Chambrone proposed to his partner, Richard Own, in front of Larson. Her character, Captain Marvel, had made a huge impact on them and their relationship since they had seen her movie on their first date.

“I have been a huge Marvel fan since I was a kid, and to see these heroes on the big screen, and embracing these issues is so exciting! It has been a long time coming so thank you Marvel, Tessa and Brie for being our champions,” wrote Chambrone in a message.

Having the support of established celebrities has helped people like Pascua in the community to comfortably come out to society. It normalizes the LGBTQ+ community to have celebrities to advocate for them.

“The more visibility we have, the more ‘normal’ we become to mainstream society. All we want is to be loved and accepted,” Chambrone wrote. “The fact that they are so vocal about these issues is amazing! I applaud them for their continued activism.”

When someone in the LGBTQ+ community does not have anyone close to them to be their advocate, looking to social media can be a way to feel the support they are lacking.

“I believe that it’s important that celebrities use their platform to voice their support for the LGBTQ+ community. In this age, mostly everyone turns to social media to look for a platform in which they feel most accepted and validated,” said Pascua. “Seeing such big influencers like Brie Larson and Tessa Thompson be so vocal in their support for the community has made me feel deserving of love when I felt I deserved the opposite of that.”

Tessa did not disappoint in bringing love and support to the crowd throughout the weekend. One of the most memorable moments was when Tessa spoke about coming out.

“I just want to say to the folks out there, if you are coming out, if you have, I see you. If you have reasons why you’re not ready, I see you too,” Thompson said. “You are loved. You are supported.”