My favorite new fall show, #The New Normal, premiered Sept. 11 on #NBC. I’m a little late to the game, but I’m starting up a review/analysis blog for each fabulous episode. If you haven’t been watching, go get caught up on hulu.com and follow along with me, starting this Wednesday, Oct. 10!

If you don’t have two hours to watch the first four shows, I’ll recap you now, ya lazy. 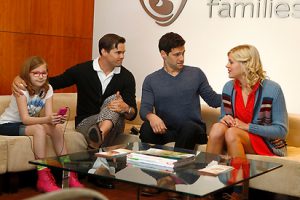 The New Normal is NBC’s take on #Modern Family with a little touch of Glee–Ryan Murphy produces both Glee and the new series. We’ve gotten to know David Murray (played by the adorable and quirky Justin Bartha of The Hangover and National Treasure films) and his partner Bryan Collins (the perfect, I-want-to-be-your-next-best-friend Andrew Rannells) as they try to start a family via surrogate. Big-eyed, ditzy but determined Goldie Clemmons is the surrogate mama, who hopes to make a better life for her weirdly awesome daughter, Shania.

Some of the most fun scenes involve Goldie’s super-rude Grandma Jane, who throws every cutting insult you could imagine at the dads. She’ll probably come around to the whole gay thing in later episodes, but for now I hate to love her, love to hate her.

The rapid-fire, sharp-tongued lines I love from Glee have absolutely found their way into the New Normal. And so has NeNe Leakes, who played swim coach Roz on Glee. She’s has a smaller role as Bryan’s assistant, Rocky. 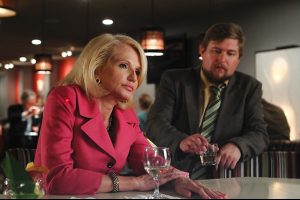 Jane, known as Nana, gets herself some lovin’ in the episode “Nanagasm.” Photo credit: NBC.com

Just like Modern Family, The New Normal is a show that can be picked up along the way. Each episode has a different dilemma, but is generally solved by the end of the 30-minute timeslot. A quick run-through: Goldie is indeed pregnant, and the surrogacy used David’s sperm; Shania has acted out twice so far, impersonating a TV character with an odd accent and getting frisky with a schoolmate in the cubby room; Bryan went cray-cray buying baby clothes; and Jane (usually referred to as Nana) rediscovered her sexuality. The latest episode left us with Bryan contacting his estranged mom, after he made amends with his partner’s own mother.

Without a doubt, one of the show’s strongest points is its casting. Four shows in, and I’m already in love with the leading padres. And I kind of want to give up college and be a surrogate mom for a gay couple, in hopes that they let me move into their awesome Los Angeles guesthouse and shower me with gifts. DreamBig.

Literature has been used to educate, entertain and tell the stories of a group of people for thousands of years. Representation in all forms…