“#Coming out” is never an easy task for anyone. Even those of us out there who didn’t face people disowning their existence (as many members of the LGBT community do) know that it’s not only a process that happens over and over again, but one that can tear someone apart over and over again. Needless to say, it’s a tough process. 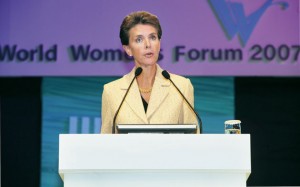 Now imagine you’re one of the highest-ranking people in the ninth largest private corporation in the United States. During your day job, you handle over 21 billion dollars for a company with 141,000 employees. You have a place on Secretary of State, Hilary Clinton’s International Council on Women’s Business, and you were once a top advisor in the Department of Treasury. You’ve recently been ranked by Forbes as the world’s 99th most powerful woman, and, oh yeah, you’re also a #lesbian.

If that showcases your life, then you’re none other than Beth Brooke, the Global Vice Chair of Public Policy of accounting firm, #Ernst & Young. Beth has an extensive résumé, but wasn’t “out” at work or in the public spotlight until recently. She led her life in silence despite being such an important female figure.

By now, I’m sure you’ve all heard of the It Gets Better Project, an online video campaign aimed at reminding LGBT youth that their lives have great potential. Started in 2010, It Gets Better hit the ground rolling and grew into a YouTube phenomenon with videos from Lady Gaga, President Barack Obama, Google, Ellen DeGeneres, and more than 50,000 other people around the globe.

Brooke’s featured interview in a July 2012 Wall Street Journal article informed the public that the video’s intention was to share #EY’s company acceptance policy. Beth took the opportunity, though, to share her true self with the company and with the world. Near the end of the video, Beth looks directly at the camera (in classic YouTube vlogger style), and says “I’m gay and I’ve struggled with that for many years.” She goes on to talk about her coming out experience, and imparts her core message: that “life really did get better”.

Beth shows the LGBT community that life gets better when one is true to his or her self and that despite being the minority, having a loud voice is like being the majority. Even if you’re not a Wall Street executive, it’s important to remember that no matter who you are and no matter what it is that you’re doing, just be true to yourself, and you, too, will be part of the majority!

While social distancing, #LGBTQ+ people may face challenges that cisgender and heterosexual people don’t, whether that’s being isolated from the rest of the community…