The feature, which Tinder released on Nov 15, provides more options for users to describe their genders as well as a feature that allows users not to show their gender at all.

“Starting today, no matter how you identify, you can express your authentic self on Tinder,” the dating app’s team wrote in a blog post.

The idea that “identity politics” are a large reason that Hillary Clinton lost the presidential election has been poured over and written about again and again in condescending articles, jokes and tweets from straight, white, cis Americans over the past three weeks since the election.

Democrats and Republicans alike have insisted that focusing too much on equal rights for minorities caused a rift between them and white voters and effectively turned the tide over to President-Elect Trump.

Wherever you stand on the issue of these “identity politics” and their effect on the election, there’s one thing that needs to be clear – these jokes are not helpful to those who are living with a real fear of losing their basic rights.

On Nov 21, Jost, an apparent Democrat himself, defended the joke, tweeting in response to criticism;

“It’s politics. A lot of politics is messaging and getting America on board. I want to examine how we failed at that goal.”

He continued in another tweet “I worry about not doing any self-examination and making the same mistake again.”

The problem with this joke, and those similar, is that it doesn’t just take aim at so called “smug” liberals, but rather at people who may be struggling with transphobia. 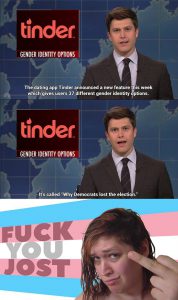 “Inclusion and acceptance drive this expansion, and we want Tinder to reflect the world that surrounds us every day,” Tinder continued, in it’s explanation of the feature.

The #Transgender Population: A Misunderstood Scapegoat

In 2014, FiveThirtyEight writer Mona Chalabi wrote a piece explaining why no organization has a number for the size of the transgender population.

Chalabi mentioned a Williams Institute study, which then estimated the number of trans people in the US at approximately 700,000. Since then, the Institute has released another study in which that figure doubled, to about 1.4 million.

It seems absurd not to have a consistent idea of the amount of transgender or non-binary individuals living in the United States when you consider that every other part of our population can be surveyed and broken down into numbers – race, class, and even things like food preferences.

Concerns of discrimination, hatred and violence can keep trans people from being open with their gender, making the lack of data in counting them understandable.

It’s undeniable that this fear, and the hatred it stems from, has been glossed over in a lot of our media still today.

Right now, shows like Transparent, in which Jeffrey Tambor plays a trans woman who comes out to her adult kids, and Sense8, a show co-created by a trans woman and starring a trans woman character, point towards an upward tick in understanding and visibility for the trans community.

But there is also an almost constant stream of news articles showing that society still has a long way to go in order to create a safe and inclusive environment for the trans community.

From things like discriminatory bathroom laws to a rising amount of violence, 2016 has been a harsh year for the trans community.

In 2017, we will swear into office a president and vice-president who have shown no concern and, in Pence’s case, open hostility towards the #LGBTQ community.

So, when comedians and entertainers say that things like fighting for inclusiveness and recognizing non-binary genders is what lost Democrats the election, it places the burden on the trans community.

It takes the blame off of the hateful and bigoted rhetoric that an astonishing amount of people in this country voted for and puts it firmly on the shoulders of a community that has been beaten down, treated as mentally ill and murdered.

Punching Down Is More than “Just Joking”

Jost’s jab is not “just a joke” on a variety comedy TV show. It’s a joke that undermines an uncounted number of the population’s reality on a TV show with millions of viewers.

It’s irresponsible for Saturday Night Live and Jost to take no responsibility for the way they portray certain groups and the harm it can cause.

These types of “punching down” jokes don’t take aim at the hateful rhetoric surrounding instances like Tinder’s decision to include more gender options, but rather add to it.

Jost’s joke didn’t take aim at the people who believe the trans community deserve hatred and violence, those who have done nothing for the community at large and have no interest in the struggles they face. Rather, the joke took aim at the community – and its supporters – for believing people have a right to describe their genders as they please and still receive the same rights as, for example, Mr. Jost himself.

The Violent Consequences of Punching Down

Punching down, or insulting marginalized people in the name of “comedy,” on the trans community can have psychological and emotional effects on transgender individuals. This can cause them to hide or suppress their gender because to be transgender or nonbinary is to be “other.”

In 2014, UCLA’s Williams Institute found that 41 percent of surveyed transgender individuals reported having attempted #suicide, compared to 1.6 percent of the general populace.

There are many different factors that can cause a person to commit suicide, but internalized transphobia can increase the risk.

When trans individuals – particularly youth – encounter jokes that play on stereotypes and misinformation, they can begin to believe those things about themselves or the trans community at large creating a path for self-hatred, depression and suicide.

Beyond the direct effect on the transgender community, jokes that play on negative beliefs can affect individuals indirectly by validating the hateful way some people react to them.

Earlier this year, comedian Ricky Gervais came under fire for this same kind of joke made multiple times throughout his hosting of the Golden Globes.

Throughout the show, Gervais took aim multiple times at the different representation of the trans community in #pop culture – from vividly describing Jeffrey Tambor’s genitalia (due to his aforementioned role in Amazon’s Transparent) to calling Caitlyn Jenner by the wrong name.

Jennifer Ware examined the “psychological danger of laughing at offensive jokes” in a piece for Quartz following Gervais Golden Globes performance in January.

“In the absence of any interesting commentary or insight, we’re forced to ask why it is that Gervais thought this topic was worth joking about,” Ware wrote. “It seems the only answer is that he thinks being transgender is funny.”

As Ware explains, comedy can be a way to broach sensitive topics that people may otherwise be uncomfortable for many people. (Ware cites Tig Notaro on cancer, George Carlin on religion and Chris Rock on race as examples.)

Studies have suggested that we believe much of what we hear or read by default. So, when a harmful joke or comment goes unchallenged, it can hurt us all in the long run as it allows a normalization of the negative stereotype or belief to subsist in our subconscious.

Jokes that challenge the norm and call out harmful beliefs can cause people to think harder about the subject their laughing at and pave the way for a larger conversation to take place.

This isn’t a foreign concept to shows like Saturday Night Live which has shown a willingness in the past to challenge harmful beliefs from political leaders and the general population alike.

There’s a social responsibility that comedians must assume and consider in each joke that airs on TV or onstage. This goes not just for Saturday Night Live but comedy as a whole – from scripted network shows to stand up.

#Facebook is good for a lot of things, but what it’s best used for is what I like to call “pre-#screening.” Let’s say I…