In case you haven’t heard the stereotype, allow me to make your acquaintance. Lesbians are infamous for #U-Hauling: #moving in together before the relationship has even reached that infamous three-month itch. Supposedly while other genres of couples are just starting to leave toothbrushes at the other’s residence, we lesbians have already adopted a cat and started sharing bank accounts. Evidently we all just love those furry felines. I certainly do… and no, that wasn’t meant to be a pun. 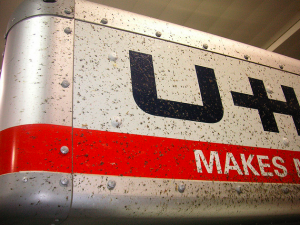 From personal experience, I have to admit that moving in together early on in the relationship is rather common amongst gay women. It isn’t just a lesbian thing though. It seems to be a “naive young person” thing. In fact, it is also a “I-have-a-dysfunctional-family-can-I-stay-with-you?” thing. While sometimes it works out, other times it just doesn’t. And a good lot of the time, people get fucked.

Allow me to explain …

When you #live with somebody, whether it’s a roommate, your family, or your significant other, you are expecting a #commitment to sharing resources to one extent or another. Usually your roommate isn’t in a position to cheat on you or decide that you “just aren’t destined to be together.” Family too, tends to not break up with you, although they might send your ass to rehab. Significant others, however, might cheat on you, might leave you for somebody else, or they may simply realize that you aren’t “made to be.” I’ll address that crock of shit another time. At any rate, what happens when they move out after the theoretical breakup?

Depending on your financial situation (if you don’t have rich parents, that is), you may find yourself stuck in a lease you can’t afford, unable to feed yourself on your budget, suddenly needing to work multiple jobs (forget your GPA), and even having to move back in with your parents if you can’t find a roommate. God forbid you two had a one-bedroom apartment after being together for only two weeks.

Guess how you can prevent the aforementioned mess? STOP what you are doing, and THINK for at least five more minutes. Hey, if you can live with the consequences of a potential breakup without losing that roof over your head– good for you. Go ahead and make that stupid mistake. But for those of us who can’t afford it… maybe waiting another three months or so would be advisable. And regardless of whether you’re gay, I promise your parents will be happy with you if you wait before making a rash move-in decision. Don’t piss off the people who love you. You know, the ones who permit you to use their house for laundry and their nice sweaters for wiping away your snot when you’re crying about that breakup– or the fact that you’re still together, for that matter.

A recent poll showed that one in four Americans don’t want to be friends with me because I’m #transgender. Even fewer would consider being…