#The New Normal approached the hot button issue we were all waiting for: #gay marriage. With two unmarried gay men planning a family, the theme was bound to arise. In its typical quirky fashion, the show brings around the issue through 10-year-old Shania, who gets “pretend” engaged to her skeezy but sweet classmate, Wilbur. He figures now that they’ve been friends for four weeks, they might as well get hitched. So with a Ring Pop on her left hand and a gift registry at Toys R Us, Shania gets the whole gang in a frenzy to plan her “#pretend wedding.” And of course, Bryan plans the pretend wedding like its his very own. 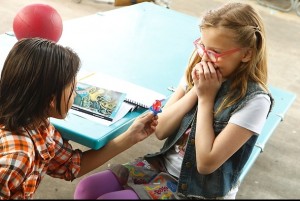 “Marriage is not for dogs, it is not for children and–I’m sorry, boys–not for you.”

I love the show’s use of flashbacks to build the character’s stories and provide another layer of hilarity. Bryan remembers one of his first dates with David (at a restaurant that looks a lot like the Breadsticks eatery in Glee) when they first discuss marriage. Bryan is all for the American Dream of a big wedding with lots of babies to follow–and David scoffs at the idea of a civil union when they can’t legally wed.

The quote above is from the lovely Nana, who vehemently opposes her great-granddaughter Shania’s mock wedding. She’s even puts together a task force of mini Ann Romneys from Shania’s class. “I have picked every one of you girls because I saw the Romney stickers on your parents’ cars,” she says. “That, and you know how to sit with your legs together.”

The schoolgirl minion trio stages a revolt at the pretend wedding later on. Before the nuptials begin, Wilburs gets a kid-version of cold feet: “I’m 10, dude! And I’m about to lock it down with Shania forever!” but the show must go on.

The show keeps me cracking up with the reading of Shania’s favorite poem for the wedding guests. It’s not Poe or Dickinson–it’s “Right Thru Me” by Nicki Minaj. Bryan’s ever-sassy but always-supportive assistant Rocky reads the lyrics as her boss mouths out the words by memorization. Reason I love Bryan, #5985. 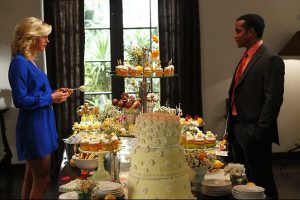 “There’s no room to feel weird, because all I feel is love.”

Shania’s vows are stupidly cute, and actually hit on feelings us grown-ups (am I even considered one?) have about significant others. When the officiator (tall, dark, handsome and a brewing romance with Goldie) asks if anyone objects to the marriage, Nana’s task force stands. One claims she is engaged to Wilbur, too; one says he kissed her just yesterday. Shania immediately runs out, crying, and all the fake hoopla was for nothing.

“Did you call Disneyland and cancel the fake honeymoon?”

After all the pseudo-drama, the show’s real heart comes through without coming off as cheesy, a true talent of the series. Nana tells Goldie she was just trying to help Shania, because she thinks her role models are “damaging”: two women with failed marriages and two gay men “playing house.” Goldie tells her grandmother to go home…all the way home, to Ohio. Love that my home state pops up in both Glee and The New Normal! 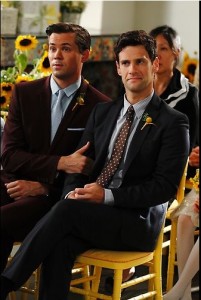 How friggin cute are they, right? Hope their wedding episode is as fabulous as they are. Photo Credit: NBC.com.

Finally, the mastery of this show is its ability to make me laugh and cry within one 30-minute episode. David brings Bryan to his OB-GYN office, where Goldie is set up for an ultrasound…surrounded by bouqets of white roses…okay, stick with me here. They take a look at their growing baby on the screen, and David drops to one knee, old-school, and pops the question.

After everything, he has realized the beauty and commitment that comes with marriage (meehhhh, but still making me cry) or, in their case, a civil union (boo, California). And David wants to be at that level with his partner.

The scene comes crashing back to cheese-ville, though, when David pulls out a Ring Pop for Bryan. Now would be the perfect time for Bryan to throw a zinger at him–“What am I, a pre-teen diabetic?”–but he accepts the candy jewelry with happy tears. Couldn’t he have gone for a real ring, to show this is a real commitment and a life-changing moment? Right? Right.

Comedian Judy Gold will be performing at #Kent’s first #Rainbow Weekend, a weekend-long celebration of the #LGBTQ+ community from March 6 and 7 in…