Try to remember the first time you saw #a love story.

Or the first time you learned what a family is supposed to look like. What were the qualities of these people? Were any of them #LGBTQ+?

It’s likely that no story you can remember from when you were young was LGBTQ-representative.

The U.S. still has a long way to go in fostering a greater overall understanding and respect for the LGBTQ+ community, including making the people in it feel welcome and equally valued. We owe a lot of this to the country’s education system and the lack of diversity exposure and inclusive environments for children, whether it be in homes, in schools or elsewhere. This responsibility needs to be effectively surfaced today by both educators and families to bring acceptance into the bigger picture.

How young is too young to start talking about LGBTQ+ topics? Many families and education facilities have trouble distinguishing LGBTQ+ topics from sex education. However, the understanding and normalization of LGBTQ+ identities is something that matters at all ages and should be introduced not only in adolescence, but even in the preschool years, through age-appropriate means.

This does not mean talking to preschoolers about sex.

Introducing the basic concepts early on (such as discussing what LGBTQ+ stands for and what gender is) will help prevent stereotypes from forming, and it will dismantle the view of LGBTQ+ people as an adversity in society. Groundspark, a film and campaign organization, recently produced a film on elementary-aged children that provides adults with practical lessons on how to talk with children about LGBTQ+ people. In the film, it is evident that name-calling and anti-gay slurs can start as early as kindergaten, first and second grade, and the things these kids had previously been told about LGBTQ+ people was often based on misinformation and negative stereotypes.

As Groundspark states: “When teachers are silent about gay and lesbian people, students learn from this omission that it is acceptable to use anti-gay put-downs.”

Actions motivated by homophobia, transphobia, etc. have obviously not gone away, and this strongly applies to young age groups. These biases manifest themselves in many ways, from invisibility in the curriculum and school policies to active teasing, bullying, harassment and physical violence against children not only in school, but often times these negative reactions are brought upon by parents and families as well. In many cases, LGBTQ+ children grow up constantly worrying about “disapproval and rejection”, as Groundspark describes.

The abnormality and negativity that is still too often associated with non-straight and non-cisgender identities is a problem for youth that often transcends into adulthood. If children are brought up under the impression that it is not acceptable to be part of the community, it not only hinders the self-acceptance of individuals all throughout their development and adulthood, but this unwelcoming environment also fuels negativity rather than encouraging allyship.

Exposure to diversity is crucial in development, in order to implement respectful behaviors and to make children who identify with this diversity feel included and represented. 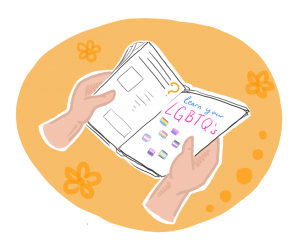 “Gender identity refers to an internal sense people have of who they are that comes from an interaction of biological traits, developmental influences, and environmental conditions,” says the American Academy of Pediatrics. “Most children have a stable sense of their identity by age four.”

Lindsay Amer is a non-binary equality activist, GLAAD Rising Stars Grant recipient and founder of a webseries called “Queer Kid Stuff,” which aims to eliminate stigmas by educating future generations through kid-friendly videos. As described on their kickstarter: “Queer Kid Stuff imagines a kinder and more equal future through highly-accessible, educational entertainment for all ages.”

Their mission is to break down complex topics at a young age so that in the future, it may not have to be as complex. There’s no denying that a stigma is still present and that there are more questions than there is understanding and support, as ignorance continuously emerges among many people in society. Helpful and purposeful conversation, such as responding to diversity with an open mind and willingness to learn more, is something that leads us in the right direction. Instead, it’s often made into a topic of confusion and judgement. Hopefully, one day LGBTQ+ identities are no longer big news or require excessive conflicted discussion.

Eliminating the lens of abnormality that LGBTQ+ people are viewed through will also help diffuse the pressure attached to coming out. Coming out of the closet is one of the most stressful situations for many, and if the future is one of increased pride and empathy, this does not have to be the case. Families can do an enormous part in spreading this through generations, but schools play a vital role as well.

Through LGBTQ-inclusive cirriculum and encouragement of respectful behavior, schools can help students gain a more open-minded and authentic understanding of the world around them  and ensure that LGBTQ+ students see themselves reflected in lessons. The only states that have started to lawfully require LGBTQ-inclsuive cirriculum are California, Colorado, New Jersey and Illinois, which are implementing LGBTQ+ history into many school districts. LGBTQ+ issues can be incorporated in schools across the US in the context of lessons about families, current events, literature and civil rights, as well as LGBTQ-inclusive health and sex education for appropriate age groups.

However, based on the limited number of states with laws in support of this, LGBTQ+ education is far from the norm. According to the Gay, Lesbian, and Straight Education Network (GLSEN), an organization fighting for LGBTQ+ cultural inclusion and awareness in K-12 schools, Alabama, Louisiana, Mississippi, Oklahoma, South Carolina, and Texas prohibit schools from teaching about LGBTQ+ topics in a positive light. These regulations are often titled the “No Pro Homo” Laws.

Some states even require teachers to speak about LGBTQ+ people with a negative connotation, GLSEN says. Alabama law, for example, states that when discussing sexual health education, “classes must emphasize in a factual manner and from a health perspective, that homosexuality is not a lifestyle acceptable to the general public and that homosexual conduct is a criminal offense under the law of the state.”

GLSEN believes that these types of laws “foster an unsafe and unwelcoming school atmosphere.” The organization has been very active in working against this unwanted atmosphere, even making an impact in Ohio schools. By the end of 2013, GLSEN had distributed a “Safe Space Kit” to every middle and high school in many states including Ohio, an example of one step that can be taken to unify communities.

An effective next step to take following this action would be implementing the same positive influence in elementary schools as well. “Unfortunately,” GLSEN says, “many LGBT students in Ohio do not feel safe in school. Eight in ten LGBT students (82%) experience harassment in school because of their sexual orientation; 40% report being physically harassed; and 22% report being physically assaulted…” These statistics, sourced from a 2015 GLSEN Ohio State Snapshot, have since somewhat improved, however we still have much progress to make that we can’t ignore.

The importance of diversity exposure and welcoming environments for children has become increasingly crucial. The push for unconditional acceptance continues to grow, and this lack of exposure is a major example of something that’s holding it back. Normalizing LGBTQ+ identities at a young age not only benefits children while they develop as individuals, but it strengthens the overall equality and alliance among all people through generations. Simply, diversity is not adversity, and this is something that needs to be reflected in communities of all ages.

Thursday, Dec. 1 marks World AIDS Day, a day for remembering those who are fighting, have fought or have lost their lives to the…