#Women of #Kent State University were honored for their leadership and influence at the ninth annual Mothers, Mentors & Muses ceremony.

Thirty-three women were recognized this year at Tuesday’s event, and over 350 women have been honored by the program, according to Women’s Center director Cassie Pegg-Kirby. The women are chosen through a nomination process, similar to how the center chooses SAGE Project honorees.

Stephanie Smith, a professor of public relations and communication at Kent State, gave the keynote presentation about her experience in the CIA and living authentically.

Smith, who was honored at the event in a previous year, said she believes authenticity relies heavily on identity, and that people have many identities that are always growing and changing.

During her time in the CIA, Smith said, she lived undercover for some time and had multiple aliases and cover stories. It was this experience of hiding her real, authentic self that made her appreciate her identity.

“We are meant to grow bigger,” Smith said, urging the audience not to shy away from new experiences and challenges. She also said a key to her success in the CIA and at Kent State is learning from others.

“I cultivated mentors who were smarter than me and willing to teach me… They prepared me to lead,” she said. “And they taught me that it’s my moral obligation to prepare others to lead.”

Smith also emphasized the importance of finding an honest voice in oneself — and not being afraid to use it.

“When you find your authentic voice, go where it is gritty,” she said. “Don’t stick to the easy road.”

Students asked Smith questions about formative moments and people in her life, as well as the biggest mistakes she made along the way.

One of those mistakes, Smith said, was only having one mentor for many years, and waiting until she was in her 30s to begin mentoring others. She also said that it is important to mentor, and be mentored by, people who are unlike you, in order to expose yourself to as many types of people as possible.

Another audience member asked how Smith maintains focused on helping others during times of personal turmoil.

“There is no mightier concept than a work to be done,” Smith said. She said that she relied on her mission of teaching at Kent to get through the death of her mother, who she called the most definitive person in her life.

In addition to the 33 women recognized, Dr. Dianne Kerr received the Heather E. Adams Woman of Impact Award, an honor that the Women’s Center added to the program in 2017. 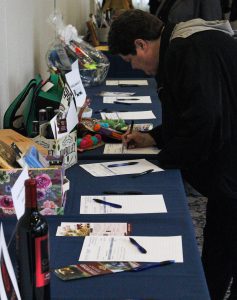 Kerr was commended for her extensive work concerning sexual health. Since 1984, she has worked extensively on the HIV/AIDS epidemic, training educators and students about HIV. Her research focuses on #LGBTQ sexual health and women’s health and she has been awarded over $3 million in grants.

Kerr was also part of the group that advocated for transgender-inclusive healthcare for university employees, as well as helped organize the introduction of universal bathrooms to Kent campus.

“Social justice has been my passion for over 32 years,” Kerr said in her acceptance speech. “If you give to the world the best you have, the best will come back to you, like it has for me tonight.”

The Mothers, Mentors & Muses event doubles as a fundraiser for the Women’s Center Endowed Scholarship Fund, which awards $500 to female students to empower them to achieve their educational goals. This year, four students were awarded scholarships, and 34 women have received the award to date, Pegg-Kirby said.

Attendees of the event contributed to the fundraising by bidding on items in a silent auction and buying bottles of wine.

Women who receive the scholarships must show academic performance, but also must show dedication and contribution to social issues. Smith calls this “servant leadership” and says it is up to the individual to realize how they can contribute to social justice.

“Do not wait for power to be given to you by others,” Smith said. “Assume you already have power, and use it.”

Book: The Gentleman’s Guide to Vice and Virtue Genre: Historical YA Fiction Rating: 10/10 I never used to be a fan of historical fiction….