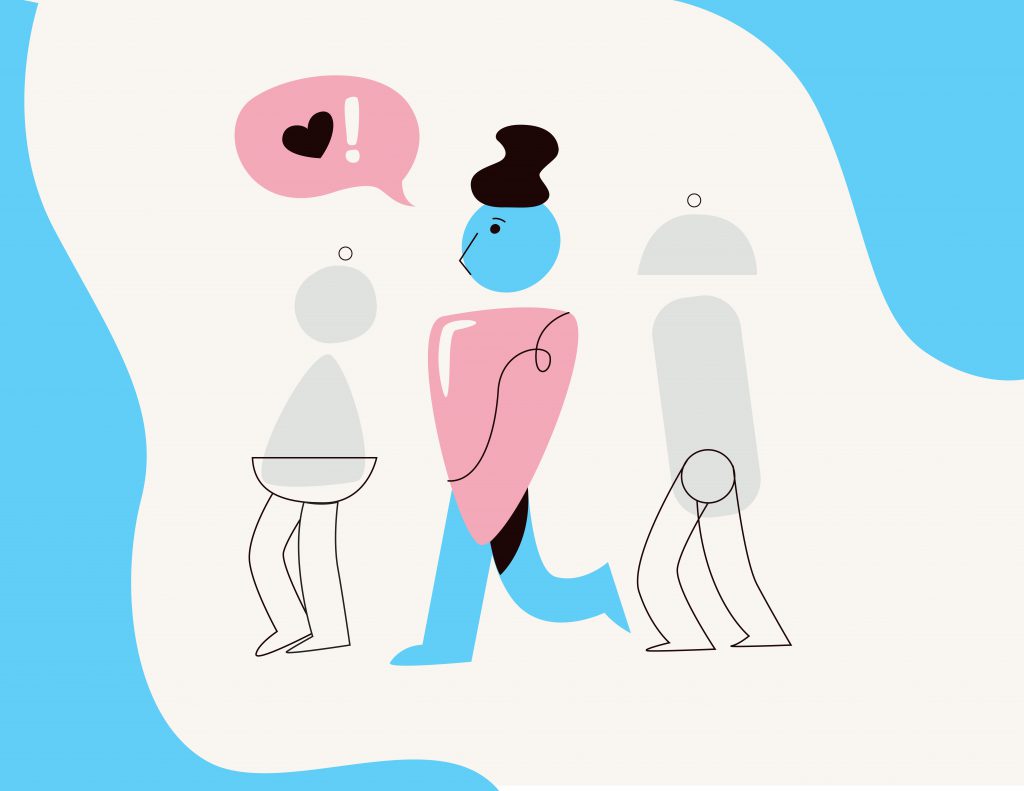 Figuring out who you are is not an easy task. Levi, a transgender man, shared his own memories of his journey to becoming the man he is today.

Levi, who wishes to only be referred to by his first name, did not consider gender early on in his childhood. It wasn’t until he was in fifth or sixth grade, when he began puberty, that he started to struggle with his identity. Assigned female at birth, Levi did not like the changes his body was going through and developed what he describes as a “trans hunch.” A trans hunch is when a trans person develops bad posture by slouching over to hide their chest, he says.

When he was in seventh grade, Levi started at a new school, where he met a non-binary person who introduced him to the #LGBTQ+ community and helped him understand gender identity.

“That was the first time I ever thought about gender,” Levi says. “No one talks about it. Nobody discusses it.”

Levi identified as non-binary for a couple years after that and used she/her pronouns. It wasn’t until he shaved his head for cancer that people began using he/him pronouns, and he realized he liked it.

He started with gender euphoria, the feeling of enjoying being referred to as a specific gender, and then he developed gender dysphoria.

Clients are experts on themselves, and some signs of gender dysphoria are hiding physical signs of biological sex such as breasts or body hair, Bakovich says.

Levi eventually started to use he/him pronouns and changed his name to Levi. He first came out on the social media site Tumblr, where he got support from strangers. He also told three of his closest friends, but no family members.

Levi eventually decided to order a binder online. Binders restrict and hide the chest from showing and moving.

Unfortunately, Levi bought the wrong size. Because he spent so much money on it, he decided to tell someone about it. He came out to his father’s girlfriend to help him order a new one. She suggested he see a gender therapist.

His therapist focused mainly on his obsessive compulsive disorder and thought he was just insecure about his body, he says. But then she realized that Levi had gender dysphoria. His therapist now specializes in transgender studies. The therapist convinced him to come out to his father, with whom Levi lived at the time.

He was so worried that he packed his bags to move out, because he didn’t know how his father would react.

What he didn’t know was that his father’s girlfriend had already told his father. When the day arrived that he was supposed to come out, his father got extremely drunk, because he did not want a transgender son, Levi says. Levi eventually read him a four-page letter, pouring his heart out to his father, who didn’t seem to care.

Levi’s parents are divorced. He lived with his father and older sister, Victoria, for financial reasons. Victoria was more receptive to him #coming out to her.

“I felt very honored, very touched that Levi chose to come out to me,” Victoria says. “Even though we were not super close, it meant the world that he felt safe enough around me to tell me his truth. Levi’s coming out was emotional and a turning point in our relationship. As we started this new chapter together, it was like getting to know a brand new person.”

Levi, who was diagnosed with depression at a young age, became suicidal when he wasn’t accepted by his father. He would occasionally walk out of the house and stay at his mom’s house or a friend’s house, he says.

Levi was going to an all-girls Catholic high school. He came out to his classmates freshman year, and everyone was very accepting. The sisters who taught there were accepting of the LGBTQ+ community, he says.

He was the leader of Academy Inclusion, a group where he would sit down with younger students and teach them about gender identity.

For a semester in his sophomore year, Levi transferred to a public school, where he met a teacher named Matthew Mohrbach. When he was having a rough time at home, he turned to this teacher for guidance.

“I am always there for my students,” Mohrbach says. “I think truly that the most important thing an educator can do is listen without bias or judgement and help their students out in whatever way they can. I felt honored that he knew that I would be there for him. That to me meant I had facilitated the culture that I wanted all of my students to feel in my classroom.”

Even with all of his struggles at home, Levi was still focused on his studies, Mohrbach says, and he admired Levi for his determination. Now a teacher in Hong Kong, Mohrbach still remembers the impact Levi had on his life.

“Before Levi left my school, he gave me this lovely sewn figure that he made and thanked me for everything I did, and you had better believe that I still have it,” Mohrbach said. “Small moments like that have warmed my heart throughout my career, and Levi was a big part of that.”

Levi went back to the Catholic high school, where he graduated with honors this past May. He was the first openly transgender person to graduate from the school in 129 years, he says. He was overjoyed when he was able to have Levi as his name in the yearbook and when his school used Levi when he walked at graduation.

Levi is now working and has just started to receive testosterone with hormone replacement therapy. Eventually, he plans to legally change his name and try to get his gender changed on his identification cards.

“Since Levi has officially begun his transition, I do see him being happier,” Victoria says. “I get to see him once a week if I’m lucky, and I swear he has felt brighter and had more energy. It’s refreshing.”

Levi is excited for the future changes to his body and hopes to help educate others about the LGBTQ+ community, he says.

“Experiment with gender and sexuality because you need to figure out what fits you the best,” Levi says. “How are you going to figure it out without trying?”