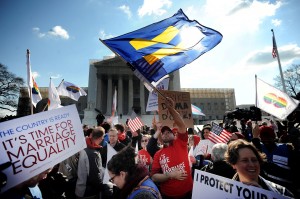 Demonstrators gather in front of the U.S. Supreme Court on Wednesday, March 27, 2013, as the court hears arguments on a part of the 1996 Defense of Marriage Act that prevents legally wed same-sex couples from receiving certain benefits by defining marriage as between a man and woman. (Olivier Douliery/Abaca Press/MCT)

The year 2012 was a pretty historic year in terms of #marriage equality. The lower house of Uruguay’s Congress voted in overwhelming support of a bill that would legalize #same-sex marriage. At the very last minute, however, the upper chamber of Congress opted to postpone the vote until April 2013 in order to further discuss the language of the bill. This bill is expected to pass the Senate in April and President Jose Mujica has promised to sign the bill into law as soon as it reaches his desk. To me, the progress in Uruguay signifies more positive change in the world than the victories we experienced here in the United States, though those victories obviously hit much closer to home. Any stigma or stereotype that we can break regarding Latin countries and homophobia is a huge victory. We also experienced some victories in the fight for marriage equality right here in the United States in 2012. Maine, Washington and Maryland all voted to approve bills that made same-sex marriage legal on election night.

This year has already proven to be looking good for marriage equality. On February 5th, the lower house of the United Kingdom’s Parliament, the House of Commons, voted 400 to 175 in favor of a bill that would legalize same-sex marriage throughout the entire UK. Before this bill can become law, though, has a few more steps to go before becoming law. The House of Lords is usually a more difficult house to pass through, but this bill in particular is expected to pass due to the overwhelming support in the House of Commons. Despite a large lack of support in his own Conservative Party, Prime Minister David Cameron has vocalized his support for marriage equality, saying: “I am a strong believer in marriage. It helps people commit to each other, and I think it is right that gay people should be able to get married too. This is, yes, about equality. But it is also about making our society stronger.” (The Advocate)

As I write this, France is continuing a vote on a marriage equality bill in its National Assembly. A common factor in all of these stories, the bill has passed the lower house and is continuing on to the Senate for another vote. The most surprising part of this story in France is that an absolutely overwhelming 63% of French citizens support the marriage equality bill. There have been reports that a demonstration to support drew in about 250,000 people in Paris and Lyon. The current President of France, President Francois Hollande ran an election campaign that included a promise to fight for marriage equality.