The Great Harvey Milk once said,

Gay brothers and sisters… You must come out. Come out… to your parents… I know that it is hard and will hurt them but think about how they will hurt you in the voting booth! Come out to your relatives… come out to your friends… if indeed they are your friends. Come out to your neighbors… to your fellow workers… to the people who work where you eat and shop… come out only to the people you know, and who know you. Not to anyone else. But once and for all, break down the myths, destroy the lies and distortions. For your sake. For their sake. 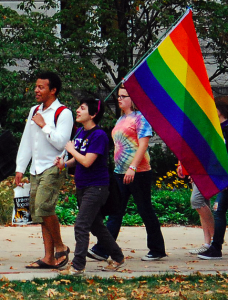 The center reports that on Tuesday, Oct. 11, it will “rally students, faculty and staff to participate in a ‘Coming Out For Equality’ vigil event at the Risman Plaza (on the K), at 6:30 p.m. The center has acquired more than 250 balloons for the event. Names of LGBTQ individuals and their allies who were bullied and harassed into suicide will be placed on these balloons. Each name will also be read out during the event to remember those who have been lost and to stress the importance of equity and inclusion at Kent State.  After a moment of silence and student and faculty speakers, the balloons will be released into the sky, signifying the releasing of the burden of bullying and harassment.”

Check out all the other cool events Kent State’s LGBTQ center is hosting to celebrate National Coming Out Week.

If you’re jones-ing to travel for the festivities, The Ohio State University will host LZ Granderson on October 11th at 7pm. The Ohio Union reports Granderson is “perhaps one of the most visible sports journalists in the nation. LZ Granderson is African-American, openly-gay, Christian, and one of ESPN’s most popular columnists.  The one time Detroit gang member is now a sought-after commentator on pivotal topics such as race, gender and politics, in addition to sports.” 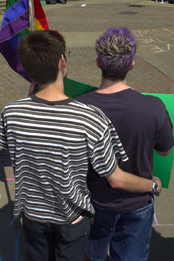 For something a little closer to home, The LGBT Community Center of Greater Cleveland is hosting its LGBT Heritage Day dinner at  Cleveland’s Rotunda Hall on Tuesday night from 6-9pm. The Center says it’s an event where LGBT leaders who contribute to the betterment of the LGBT community on a daily basis as ‘out’ members of the community are honored. There will be music, food, beverages and a short address from special guests.

“With the election right around the corner,” HRC Resources reports, “there’s no better time to send a message that you want your elected officials to come out in support of LGBT equality.”

Whatever it is you’re doing to celebrate National #Coming Out Day 2012, we hope it’s full of safe, happy and liberated fun! If you’d like to receive continual news updates about how Kent State and Ohio celebrates National Coming Out Day, follow Fusion on Twitter @OhioFusion.

Come out, come out wherever you are.