Houston Texas just voted to reinstate #discrimination, repealing the Houston Equal Rights Ordinance, which included non-discrimination protection for 15 classes of people. A hate group called Campaign for Houston defeated the ordinance by perpetuating the dangerous lie that trans women are perverted men who only use the restroom to assault cisgender women. A Williams Insititue studies shows the opposite is actually true – Trans people are far more likely to be victims of assault in public restrooms than perpetrators. There are zero cases of a trans 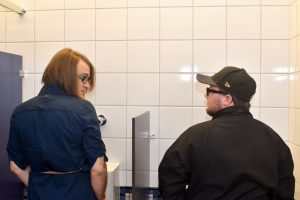 person assaulting a cis person in a restroom.

When your right to use the restroom is literally a political debate, you feel like you’re living in a dystopian society. Or should I say a pisstopian society. It might be funny if it wasn’t frighteningly real.

I worked at a local conservative call center where telephone interviewers call on behalf of right-wing superPACs, candidates and hate groups, including Minnesota’s Child Protection League in Feb. 2015. Though the workplace itself is surprisingly trans-friendly, when we conducted calls spreading misinformation urging voters to support discrimination against trans youth, I started to feel unsafe at work and quit soon after. 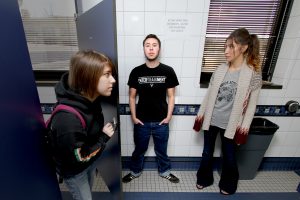 Several states have proposed legislation forbidding trans people from using gender-appropriate public restrooms and locker rooms. Bills in Texas and Florida even criminalize #transgender people (including up to a year in jail and a $4000 fine) for using the restroom.

Though I haven’t seen the issue framed as such, this actually can be a matter of life and death. It’s already a health issue, as Gavin Grimm’s case points out. The 16-year-old held his urine the entire school day because the school deferred his rights to a few hateful parents who objected to him using the boys’ room. This gave him a urinary tract infection. Those aren’t life-threatening, unlike TSS (Toxic Shock Syndrome). Since many trans people, especially minors, lack access to healthcare, most trans boys have monthly periods and may wear tampons. If you don’t change your tampon often enough, you can get TSS which is life-threatening. A risk you may run if you don’t have access to a restroom in public spaces. 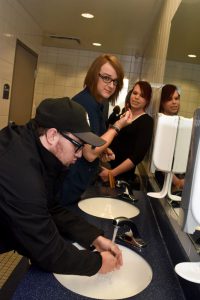 According to a 2013 Williams Institute report, approximately 70% of trans people have been denied entrance, assaulted, or harassed while trying to use the restroom.

These conservative fear-mongers want us to die. We know that. They deny our existence, call us abominations, sinners, nuclear weapons, and they debate our right to pee in peace as if it’s a matter of public discourse. It shouldn’t be. We just #need to pee.

So what can we do? Trans activists spoke out about the illogical and humiliating reality of the bathroom issue. A burly, bearded trans male Texan, photographed himself in a restroom, with the caption, “Do I look like I belong in women’s facilities?” 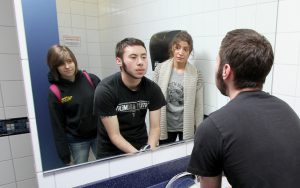 While “passing” should not be a factor in determining whether trans people deserve access to appropriate public facilities, the reality of bearded, muscular, balding trans men in women’s rooms definitely isn’t one the right-wing transphobes want to address.

Drawing attention to the absurdity here helps disintegrate the transphobic bathroom myth for what it really is: unfounded hate and fear. If you’re cisgender, please speak out against transphobic discrimination in public facilities and elsewhere. It’s a much less dangerous and emotionally charged issue for you than for us. If you’re trans, please keep your head up. We’re stuck in this pisstopian society for now, but it’s improving.

A map of gender neutral restrooms at Kent State is also available here.

Many consider William Shakespeare to be among the greatest writers to ever live; he certainly had the most nuanced sex jokes. His name is…