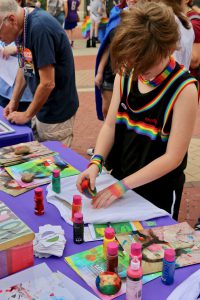 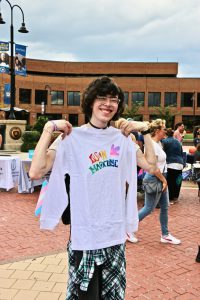 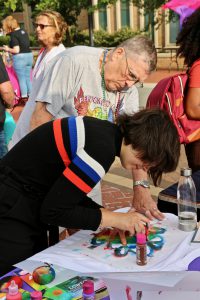 The festival consisted of music, refreshments, vendors, informational booths, and free gear to help show off pride for the #LGBTQ+ community. Students and staff alike were encouraged to feel comfortable and confident showing off who they are.

“I’m enjoying seeing so many people expressing themselves so openly. I’m seeing so many gay couples holding hands and it’s not something I see a lot on campus,” says Donna Payravi, a senior digital science major. “If I knew that there was stuff like this happening on campus when I was a freshman, I would’ve felt more encouraged to apply and enjoy the campus culture.”

Since it was held on #Kent State’s campus, it was more student-oriented, says Jordin Manning, a senior psychology major. It’s centered around the campus while other pride events are more centered around cities. Various on-campus services let the LGBTQ+ community know what resources their organizations have to offer.

One of the booths was for the Kent State police department, which was there to promote its outreach programs.

“I believe as a police department on a diverse campus that we need to interact with our community,” says officer Tricia Knoles.

The festival had an abundance of people in attendance, but many of them reported to have just discovered the festival was happening only a day in advance or the day of. Several of those interviewed mentioned that they did not see Kent State advertise the festival on any of their social media and only knew about the event through friends and flyers.

“I feel like this is more lowkey,” says Rachel Caton, a junior fashion merchandising major. “I heard about [the festival] yesterday.”

The pride ball was scheduled for 6 p.m., but it didn’t start until 7 p.m. and had very little turnout. When asked, many of the attendees did not even know about the ball.

“As with any event there were some hiccups, some bumps in the road, but I couldn’t be happier [with] how it turned out,” says Jacob Dudley, the president of PRIDE! and the organizer of the festival. “We had great vendors, great information tables, everyone had a lot of fun and we kept the rain away.”

Dudley says that they are already discussing next year and how they can make the event bigger and better. He hopes that they will be able to partner with more groups in the Kent community. A survey will be going out to get feedback on what everyone wants to see in the next Rainbow Squirrel Festival.