Dr. #Umar Johnson spoke, and at some points yelled to an audience that filled roughly half of the KIVA on Monday. Johnson is known just as much for his pro-black activism as he is for his negative characterizations of the #LGBTQ community. In radio and television talk shows, Johnson characterizes homosexuality as a curable mental disorder.

Concerned students from #Kent State gathered outside the KIVA in a silent demonstration against Johnson and his presence in Kent. Kayden Maclay was involved in planning the demonstration. 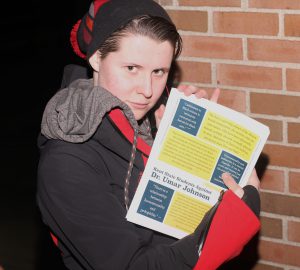 Maclay cited Gabrielle Cooper with bringing Johnson’s talk to the attention of concerned individuals at Kent and for getting people inspired to react. Cooper and Maclay also helped create signs for the demonstration.

Maclay and other demonstrators handed out fliers with some of Johnson’s controversial quotes, including “There is a connection between homosexuality and pedophilia,” and “Lesbianism in black women is intimately connected with a hatred for black men.”

#LOCKS faculty advisor, Dr. Amoaba Gooden (far right) greets the demonstrators and thanks them for being out in force for expressing their concerns

Dr. Amoaba Gooden is the faculty advisor for the League of Conscious Knowledge Seekers (LOCKS), the student organization that brought Johnson to campus. Gooden arrived roughly one hour before Johnson began speaking. After meeting with friends and colleagues inside the KIVA, Gooden walked outside and greeted the demonstrators thanking them for their demonstration.

Kent graduates Matthew Cox and Nathan Williams attended the event. Williams said he “understands the [demonstrators’] signs.” When asked about his opinion of Johnson, Williams referred  to a video interview of Johnson on The Breakfast Club, a talk radio show on 105.1 FM, in which Johnson discusses his views about people not being born gay. In this video, Johnson explains that lesbians become homosexual because they are terrified of black men, they have seen black men beat their mothers or they have been hurt or raped by black men. 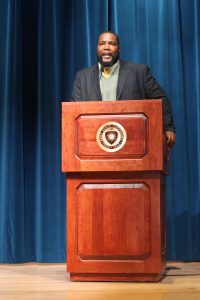 In the same video, Johnson claims that men become gay when their fathers are not present. He believes this lack of a male figure creates such a longing for male attraction that these men decide to date and have sexual relations with other men in order to fill the void left by their father.

Jordin Manning, a freshman zoology major, was able to ask Johnson a question during the Q&A session after the talk: “How do you feel about the three sapphic women founders (#Black Lives Matter) and the women involved being invalidated in terms of white supremacy and misogyny?”

Johnson took some time to mentally prepare before saying, “My plan for tonight was not to touch that […] Because I understand that the university setting is very much free and pro-everything.” Johnson said he does “not support same-sex relationships however, [he does] not hate anyone who practices it.”

He went on to explain that in his study of African culture, “there is absolutely no evidence of any traditional African society that ever condoned, accepted or allowed the open practice of same-sex relationships.” 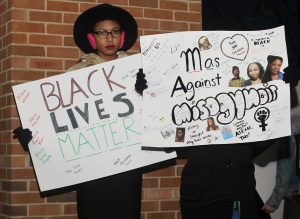 Manning believes Johnson’s response was incomplete and evasive. She especially took issue with his claim that LGTBQ people have never been systematically dehumanized and oppressed.

Even though strides have been made with the legalization of gay marriage, according to the Human Rights Campaign (HRC) it is still legal in 28 states for a person to be fired simply for being gay. In 20 states, if a gay person is assaulted it is seen as an assault and not a hate crime. Race is covered under the employment and hate crime laws in every state.

Manning said Johnson “is a great role model, but [she wishes] he would demonstrate his title of ‘Prince of Pan-Africanism’ to support all black people, sans slander.”

Sophomore public relations major Emmanuel Jackson briefly attended the event but left early due to a schedule conflict. When asked if he would stay if he could, Jackson responded with a resounding “No.” He cited Johnson’s reputation as “sexist, misogynistic and homophobic,” and his rhetoric as “more problematic than beneficial” to the black community.

Not all audience members were dissatisfied with Johnson’s talk. Freshman journalism major and active member of Black United Students (BUS) Dartalia Alati believes Johnson “said what the black community wanted to hear.” She says it’s very important to have controversial speakers on campus because the reaction can say more about an issue than a speaker ever could.

Alati was not aware of the $3,000 Kent paid Johnson through Undergraduate Student Government (USG). Jackson was aware Johnson was paid but was “disappointed with the payment” because it comes out of a fee included in tuition. Alati believes that there should be some way for students to opt out of paying for a speaker they do not agree with. 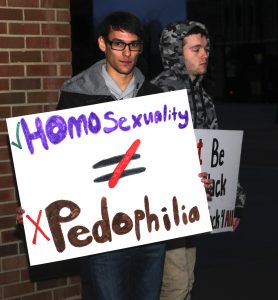 Kasey Willener and Brian Tompson hold signs outside the KIVA on Feb. 8, 2016

In an exclusive interview with Fusion, Johnson said he doesn’t mind having the demonstrators, calling it “healthy activism.”
Johnson did however criticize the demonstrators, deeming some of the quotes on their signs inaccurate or out of context. He did not specify which ones.

When asked to validate his credentials, Johnson said “I don’t do dates.” He said people can believe him or not, but maintained he is correctly certified. Johnson claims the rumor that he is not properly credentialed was started by “someone in [his] community, the black community,” who disagrees with his views.

During his talk and in the interview with Fusion, Johnson confirmed that his GoFundMe page is still active and going strong, raising over $250,000 so far. His original goal was to raise $4 million to purchase the historical St. Paul’s College and turn it into the “Fredrick Douglas and Marcus Garvey RGB International Leadership Academy for Black Boys.” According to the fundraising page, the academy would be “America’s first private K-12 residential academy for African-American males based upon the principles of Traditional Afrikan Culture, Pan-Afrikan Leadership, Community Self-Determination & Cooperative Entreprenuership [sic].”

According to the Centers for Disease Control and Prevention (CDC)’s safety guidelines, the highest risk for the spread and contraction of COVID-19 comes with…