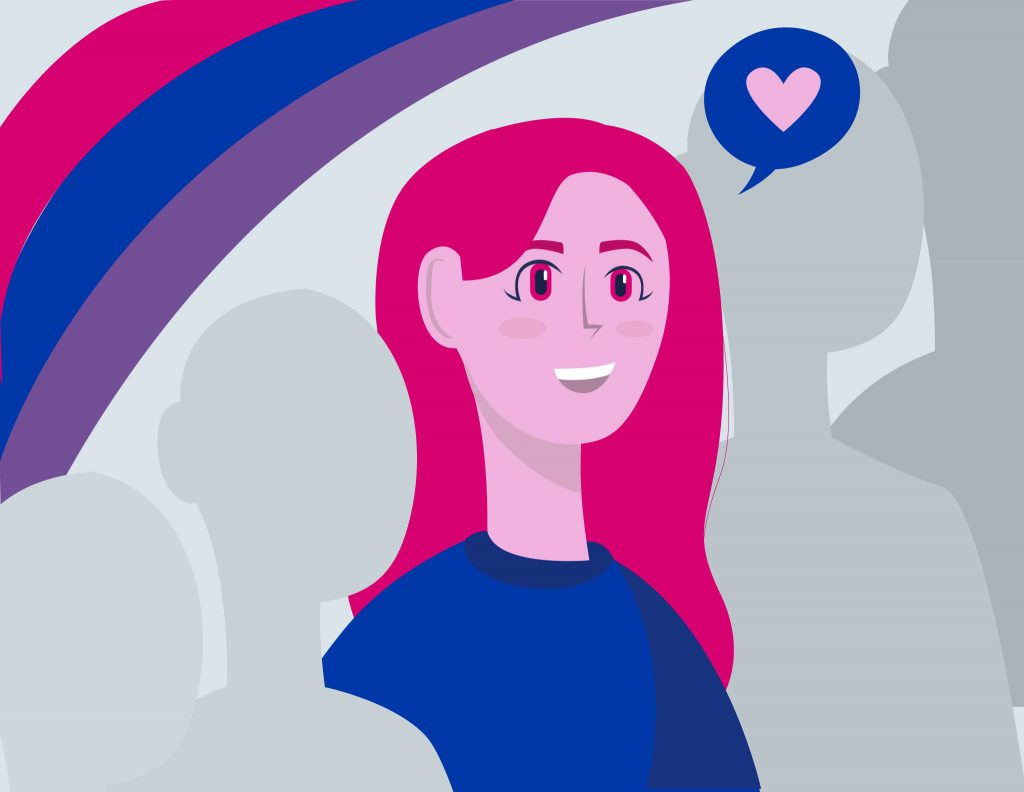 For almost all of my life, I have identified as a straight woman.

Sexuality and gender have become a large progressive movement over recent years. For me, finding my own sexuality has been a recent journey I am just beginning to navigate.

I came to college in a committed relationship with my high school boyfriend. We dated for two years and broke up as of recently. However, in the midst of our relationship, I had begun questioning my sexuality more and more.

To my previous knowledge, I had only liked men, so thinking of liking the same sex was a scary and new thought.

I was fearful of telling my boyfriend, because I did not want him to think I was not committed or look at me any differently. Since we broke up, I have come out to my friends about being bisexual. My friends are very accepting, as many of them are allies or bisexual as well.

It has been a tough thing to try to figure out, with a lot of different emotions changing in my life between school and work. Coming to terms with my new feelings has been hard to manage.

My friend, who is bisexual and in a relationship with a woman, suggested I get a Tinder. Tinder is a dating app, where anyone can sign up to match with others in their town and specify their sexual orientation. I signed up and began the typical swiping of each candidate in the local areas of Kent and my hometown, Youngstown.

Of course, having been in a long-term relationship like I was, I have no idea how to even begin talking to girls or what to put on a dating profile. I have my profile set up to connect with both men and women. Yet, honestly, I have forgotten how to even flirt in general.

Since this is an entirely new experience, my friend began assisting me in what to say when I began matching with a few girls on the app.

It has been difficult, because many women are questioning if I am actually bisexual because I “look straight” and have not actually had any experiences with women. Oftentimes, women are judged on their outer appearance, and being more feminine results in an automatic assumption of being straight.

I thought the same exact thing: How do if I know I am actually bisexual?

Well, rolling my sleeves and jamming out a little too hard to Macklemore and Ryan Lewis’ “Same Love” eight years ago definitely doesn’t mean nothing.

All jokes aside, I have realized a growing attraction to women in recent years and finally realized that these feelings are valid.

I have not felt comfortable #coming out to my family yet, because they would automatically translate this into me just wanting to be with other people out of my relationship or “a phase in college.”

Plus, having religious grandparents never helps.

Professor Suzanne Holt, who teaches women’s studies and gender studies at #Kent State, told me in an interview that people are always seeking any form of happiness in their lives, and one big factor of being happy is finding love.

“To find yourself in a novel situation where you’re second guessing yourself and doubting your own choices is because you don’t have anything to compare it to,” Holt says.

She explained that oftentimes, we are most uncertain of ourselves when we are not able to compare our personal situation to others’ experiences.

Speaking with other people about these feelings helps a lot, and I am trying to love and appreciate my feelings within myself. At first, I did not exactly accept my own feelings on my sexuality, only because I never questioned it. Now, I understand more of who I am, and I personally think sexuality is very fluid.

Holt also says it is a challenge to be suddenly deemed as “different” when in human history, it has always been known as more acceptable to fit in. Yet, the people who were seen as possibly “unusual” may have not been recognized or shown in our common history for people to feel validated. Representation and acceptance have helped me tremendously on my own journey. Being able to see other women who are bisexual in television shows and even my own friend group has made me feel more comfortable and happy with being myself.

“The ideal obviously for living your life is to be free and seek purpose and find happiness and fulfillment,” Holt says.

I may have a lot to learn and experience, but I am proud to explore this new path in my life and identify as a bisexual woman.

On October 15, 2017 the hashtag #MeToo went viral after Alyssa Milano tweeted MeToo in reference to being sexually assaulted by Harvey Weinstein. Ever…