The 2012 election seems like it started the moment President Barack Obama was inaugurated in January of 2009. It’s been a long haul, but the fight has been so worthwhile, especially for the LGBTQ community! 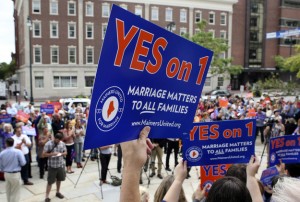 If I had to tell someone our community’s current status in one word, I’d hardly say it at all, but shout it from the rooftops: PROGRESS!

Forty years ago, there were violent displays of hatred towards the gay community; and thirty years ago, mankind discovered AIDS, which was almost exclusively blamed on homosexuals. And just twenty years ago, our great nation’s military instituted a policy of secrecy, exclusion, and bigotry: Don’t Ask, Don’t Tell.

But everything changed in 2004 when Massachusetts legalized same-sex marriage. Over the next eight years, five other states would follow suit.

Thus started the long-haul that would be the 2012 election. In #Maine, #Maryland, and #Wisconsin, there were referendums on the ballot to legalize same-sex marriage; and in #Minnesota, there was a vote to remove the limit on marriage as being between just a man and a woman.

All four of those legislations passed! #Gay marriage is now legal in almost a fifth of the country, but that’s obviously not enough.

We’ve got a long road ahead, and we need your voice. Every single American who supports marriage #equality needs to get up and let the elected officials of our country know that. We’re passed the age of the church writing laws, and we’re passed the bigotry. Humankind has dawned into a new age, where we know that discriminatory measures are the way of the past. It’s time to move past the Defense of Marriage Act (which defines marriage as between a man and a woman) and actually defend marriage for all Americans.

Masc, fem, top, bottom, vers, #pitcher, #catcher… the list goes on. We all know these words, and we’ve all certainly labeled ourselves with these…