Every four years, Democrats from all over the country, regardless of rank, gather in one place to demonstrate unity to their country and its citizens. This year the Democratic National Committee decided to hold their convention in Charlotte, North Carolina, (a key battleground state.) North Carolina also happens to be the home of yet another constitutional ban on same-sex marriage. During the convention, the various committees within the party generally meet to write and approve new language to the national party’s platform. Monday night, officials unveiled the #Democratic Party’s brand new, shiny platform complete with #President Obama’s call for higher taxes on the richest Americans and a something else that not many people expected – language supporting same-sex marriage across the country. 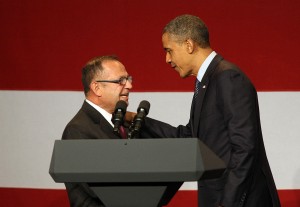 On that historic night the Democratic Party became the first major party in the American political machine to officially endorse same-sex marriage. In a party full of some of the most socially liberal-minded people on the planet, not many people could disagree with this giant leap forward – after all, there are more than 500 delegates who identify within the #LGBTQ community. For as long as I can remember, for as long as I’ve immersed myself in the general scheme of politics I’ve never witnessed such a powerful call for full equality for all people and it’s certainly been a long time coming.

To me, the party’s decision to add #marriage equality doesn’t come as a surprise at all. Earlier in the year Vice President Joe Biden expressed his support for marriage equality on Meet the Press, saying he is “…absolutely comfortable with the fact that men marrying men, women marrying women, and heterosexual men and women marrying another are entitled to the same exact rights, all the civil rights, all the civil liberties.” (Huffington Post) Just a few days later, President Barack Obama openly voiced that his views on marriage equality have changed because of his experiences dealing with the repeal of Don’t Ask Don’t Tell. With all of that being said, it was only natural that the rest of the Democratic Party affirm their support for marriage equality at their convention. After all, what better way to demonstrate unity to the country than to agree with exactly what the President of the United States and leader of the party says?

Don’t get me wrong, I’m not saying the Democrats’ call for marriage equality was solely a political move, but I’m also not saying  it wasn’t. Barack Obama’s affirmation of his support for marriage equality isn’t likely to get him many more votes – the #LGBTQ community tends to vote Democrat  anyway. However, if the Democratic Party hadn’t added marriage equality to their platform following the President’s announcement I don’t believe we’d be seeing the numbers and statistics we’re seeing today, most importantly, the numbers in key battle grounds such as Ohio, Virginia, and Florida. Regardless of the numbers, though, I find it easy to believe that Democrats, in general, support the freedom to marry wholeheartedly – and have for a very long time.

On October 15, 2017 the hashtag #MeToo went viral after Alyssa Milano tweeted MeToo in reference to being sexually assaulted by Harvey Weinstein. Ever…