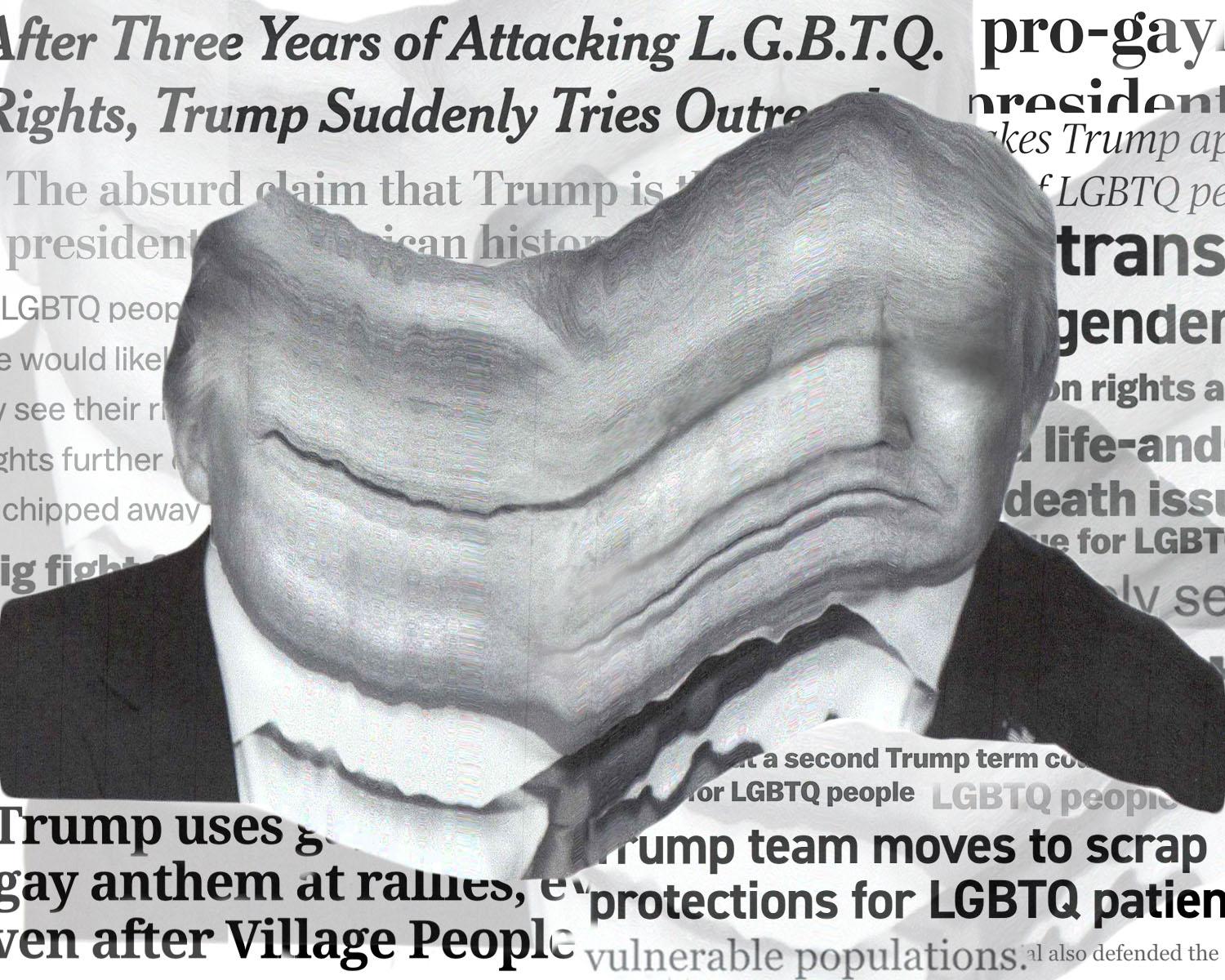 President Donald Trump has sent mixed signals regarding his views of the #LGBTQ+ community and what his presidency has done for it. It is hard to decipher Trump’s feelings toward the community because while he claims to support and want to fight for LGBTQ+ people, his policies say differently.

In 2000, Trump was interviewed by The Advocate, an LGBTQ+ magazine, when he first launched a campaign to win the nomination as the Reform Party presidential candidate. In his interview, Trump expressed mostly positive views on “gay people,” including those serving in the military. He said, “If a gay person can be a doctor or a lawyer or a teacher or take another position of responsibility, why can’t they serve this country in the military?”

Trump also alluded to appointing a member of the LGBTQ+ community to his cabinet in this interview.

“Sexual orientation would be meaningless. I’m looking for brains and experience. If the best person for the job happens to be gay, I would certainly appoint them,” he said.

Flash forward 16 years and Trump has won the 2016 presidential #election as the Republican Party candidate. After a controversial and divisive campaign, he defeated Democratic candidate Hillary Clinton, despite Clinton winning the popular vote by nearly 3 million votes. In stark contrast to the mostly supportive comments Trump previously made in 2000, his presidency and actions have been perplexing to the LGBTQ+ community.

When he appointed Richard Grenell as acting director of national intelligence, Trump made history by making him the first openly gay person to serve in a presidential cabinet. When questioned about his historic appointment, Grenell says, “President Trump, I know him well, he doesn’t care about these types of issues. They’re irrelevant characterizations about someone. What is relevant is whether or not they can do the job.”

The Trump administration has worked on initiatives that appeared to benefit the LGBTQ+ community, both in the United States and globally. In 2019, spearheaded by Grenell, the Trump administration launched a global campaign to end the criminalization of homosexuality. Seventy-two countries still see homosexuality as criminal, and there are 11 where it is punishable by death.

The Trump administration also initiated “Ending the HIV Epidemic: A Plan for America,” which would have pharmaceutical company, Gilead Sciences, donate pre-exposure prophylaxis medication, a form of preventative HIV treatment. This could cost up to $20,000 per year for uninsured, high-risk individuals living with HIV. This medicine would be distributed to 200,000 individuals until 2025, according to the U.S. Department of Health and Human Services.

Unfortunately, the bad outweighs the good when it comes to the Trump administration’s involvement with the LGBTQ+ community. Vice President Mike Pence is known to have a grim history of anti-LGBTQ+ statements and policies. While serving in the House of Representatives, Pence voted against the repeal of “Don’t Ask, Don’t Tell,” which would allow LGBTQ+ people to openly serve in the military. In 2007,  he also voted against the Employment Non-Discrimination Act and supported banning same-sex marriage across Indiana while serving as governor in 2014.

The Trump administration has targeted LGBTQ+ people in schools, healthcare, workplaces and the military, to name a few. For example, Trump banned transgender people from serving in the military, something that was opposed by military leaders and 71 percent of Americans. His administration also initiated “Deploy or Get Out” in 2018, which removes military personnel who are living with HIV.

Additionally, The Human Rights Campaign reports that Trump’s Department of Labor issued a regulation that allowed federal contractors to claim a religious exemption and fire LGBTQ+ people based on their sexual orientation or gender identity. In 2018, HHS also created a religious discrimination division, which would defend physicians and medical professionals who refused care to LGBTQ+ patients, according to the HRC.

This year, Ben Carson, Secretary of Housing and Urban Development under the Trump administration, proposed a rule that allowed for emergency housing shelters to deny access or discriminate against transgender or gender non-conforming people who are seeking shelter. The Federal Bureau of Prisons also rolled back Obama-era regulations that housed transgender prisoners in a manner consistent with their gender identity, the HRC says.

In 2017, The Department of Education and Justice rolled back protections for transgender students that clarified that schools were to treat transgender students consistent with their gender identity. The Trump administration also forced 4-H programs to erase language that welcome LGBTQ+ students into 4-H.

Students across college campuses were also affected by these policies. When Trump was elected president, members of the LGBTQ+ community at #Kent State became worried about what that meant for their rights and safety.

Ken Ditlevson, Director of the LGBTQ+ Center at Kent State, says, “Right after the election, we saw a huge uptick of students coming in for crisis. A lot of students felt like their rights were going to be lost. Some students came in (and) asked if they should get married now because they were worried about that right being taken away, and just a different number of different things that really affect LGBTQ+ people’s lives and their livelihood and their ability to feel secure.”

Kai Clemons, a senior child psychology major at Kent State, also feared that some of her rights would be taken away.

“I kind of had this alarming thought of, ‘what’s next?’ Trump has the power to do so much and after everything with the military ban and the issue with health insurance, it was just like, what’s next? It was really frightening,” Clemons says.

Another concerning aspect of the sitting president is his use of hateful rhetoric. Trump has been known to advocate violence among his supporters and, since 2017, reported hate crimes have risen across the United States. Incidents that targeted people in the LGBTQ+ community grew from 17 percent to 19 percent, according to NBC. Anti-trans violence has also been growing – between 2017 and 2018, reported incidents have risen by 34 percent. However, many members of the LGBTQ+ community are less likely to report hate crimes or violence because of distrust with police, so numbers may actually be greater than reports show.

“I’ve had students that come in and wonder how 47 percent of the country still stands behind someone who speaks so much hate?” says Ditlevson. “I’m also surprised by the level of backing. It’s not a Republican/Democrat issue – it’s about decency and talking about people respectfully.”

Regarding how she reacted to the hateful groups that have risen after Trump’s election, Clemons says, “His rhetoric and the beliefs and philosophies that Trump throws out encourage certain hateful groups to rise. A lot of people really came out in a way because they saw their beliefs being represented by Trump. He encourages people to be hateful. I felt like I had to go back into my shell because I didn’t feel safe. I felt like how I did before I became more comfortable with myself and kind of had to shrink back into myself.”

Clemons adds, “Trump has really set us back. I do feel like his policies have been specific against trans people, and I feel like these policies are a step back from the Obama administration.”

“I don’t think anyone in the LGBTQ+ community would say that he is a part of our community,” says Ditlevson. “He claims to be an ally, but allyship is earned and is something that is demonstrated. Members of the community call you an ally – you can’t claim it yourself.”

The policies and social implications of Trump’s presidency have had a profound effect on the LGBTQ+ community. This makes the stakes of the 2020 presidential election even higher.

“I think it’s so important, regardless of how you feel, to let your voice be heard by going out and voting,” says Ditlevson.

Former Vice President Joe Biden is running as the Democratic nominee for president, and his policies are more progressive and inclusive than Trump’s. Biden has openly shown his support for the LGBTQ+ community – for example, he endorsed Danica Roem, who is the first openly trans person to be elected to state legislature in U.S. history. Biden plans to protect LGBTQ+ people, and his presidency could mean relief for the community.

“If Biden is elected president, I think people will feel safer,” says Clemons. “His policies are a step in the right direction, and I know that Biden won’t use language that attracts homophobic people or hateful groups.”

Ditlevson says, “There’s always going to be people standing against equal rights. But in my opinion, those people are always on the wrong side of history.”

Letters from the Closet is Fusion’s new submission series, in which we publish anonymous letters from people who aren’t ready to come out yet….