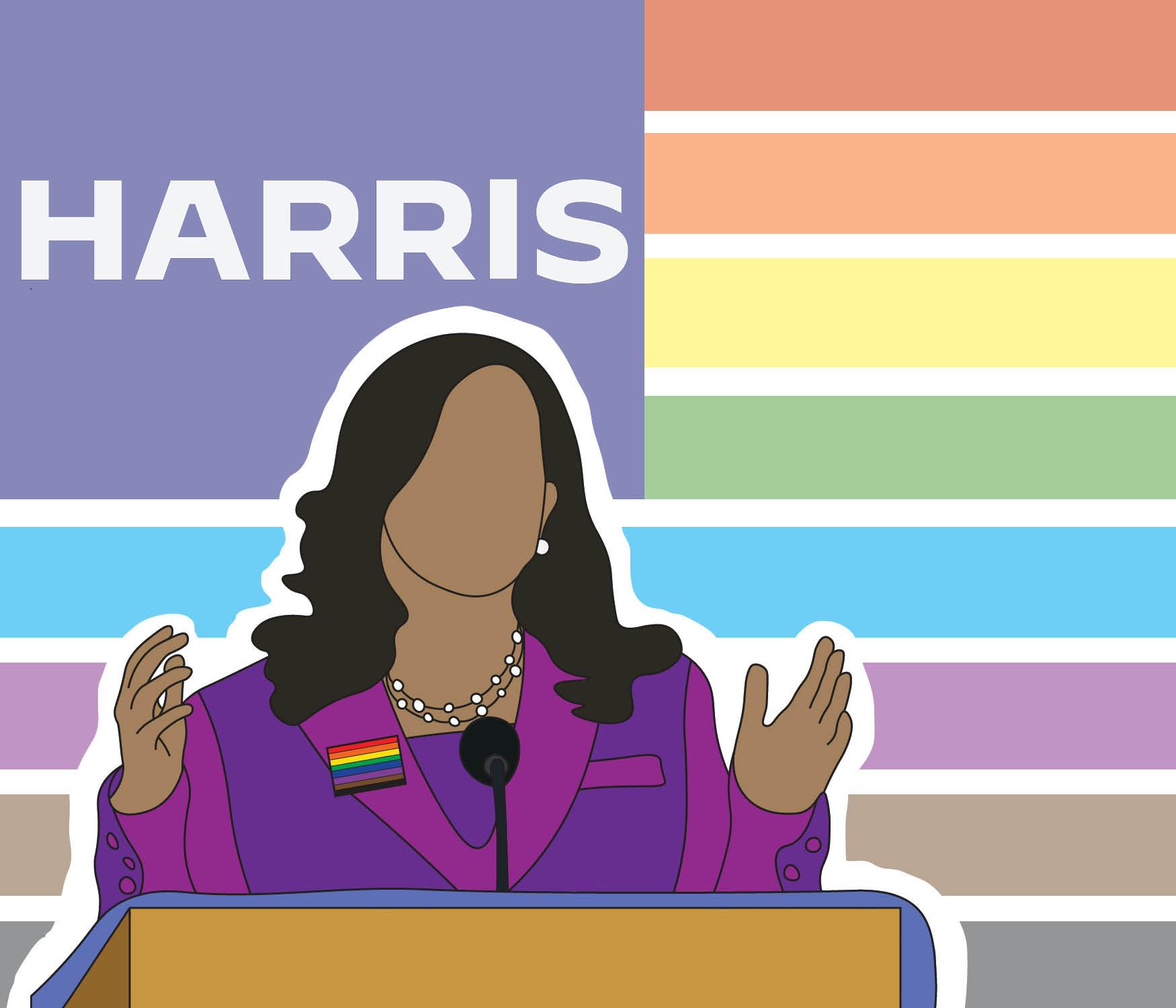 Harris has served multiple roles within the justice system, including District Attorney of San Francisco and Attorney General of California. Currently, she serves as the junior senator of California. During her time within these roles, Harris has done tremendous work, such as co-introducing police reform legislation with Sen. Cory Booker. She has also been scrutinized for her “tough on crime” policies and a criminal justice record riddled with contradictions.

One specific group of individuals that Harris has focused a substantial amount of her career on is the #LGBTQ+ community. Within her different roles, she has implemented policies and regulations that favor the safety and protection of individuals in the community.

Molly Merryman, Director of the Center for the Study of Gender and Sexuality, says in an interview, “Senator Harris is someone who has had a consistently positive record when it comes to the LGBTQ+ community.”

Merryman described that Harris is someone who has always advocated for hate crime legislation. When she served as attorney general, one of the first things that Harris did was establish a hate crimes unit. This unit was made to tackle the issue of criminal acts that are generally motivated by bias or prejudice towards specific groups of individuals.

Harris was also involved in a conference that brought together law enforcement officials to discuss strategies of how to put an end to what is called gay and trans panic defenses. Due to Harris’ efforts, California became the first state to ban both panic defenses.

“She is a woman of color in a pretty white male-based profession, and then she is coming forward and arguing (for) some of the most marginalized individuals who are in the system,” says Merryman.

Merryman explains that Harris uses her political capital to help individuals that truly need it the most. She continuously fights for those who don’t have the power or platform that she possesses. Accepting and LGBTQ+-affirming leaders such as Harris are necessary to countering injustice.

“Harris has a 100% ranking in terms of supporting LGBTQ+ individuals,” says Merryman.

This is in contrast to President Donald Trump and Vice President Mike Pence, where these two leaders have spoken out multiple times about their opposing view of the LGBTQ+ community.

“Trump has tried to make a claim that he is the best president ever for individuals who are LGBTQ+,” says Merryman.

However, Trump has made numerous attacks on the LGBTQ+ community during his time as president, such as banning transgender individuals from serving in the military and refusing to condemn attacks on LGBTQ+ people in Chechnya. Pence is an outspoken opponent of marriage equality and, according to Time, has favored religious freedom laws that facilitate discrimination against LGBTQ+ people.

“Compared to the Biden-Harris ticket, the Trump and Pence administration doesn’t even come close,” says Merryman.

Both Biden and Harris combined have extremely distinguished records. According to NBC News, 74% of LGBTQ voters support Biden for the presidency. When comparing that to an administration that has shown they are not in support of the community, many people grow apprehensive about the damage Trump and Pence could do if granted another four years. This election has become a chance to correct the injustices that have occurred over the last four years, and it is a reason to get out and vote this year now more than ever.

As I sit here, there is an open bag of Fritos to my right and a can of Rockstar to my left. If I…